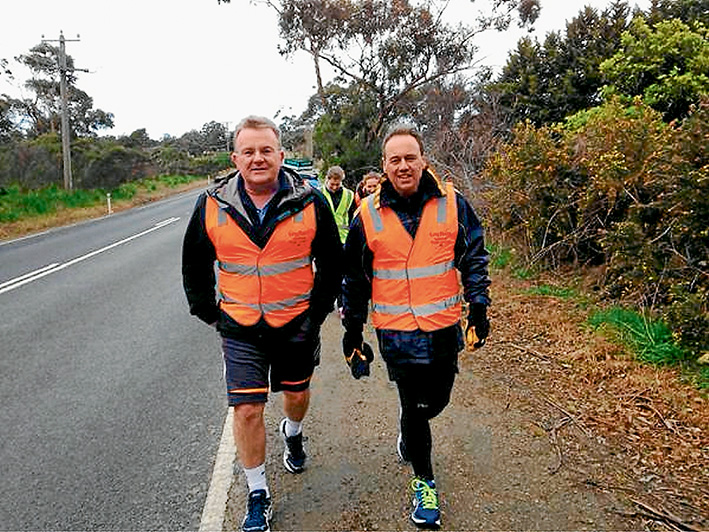 DEEP divisions within the Liberal Party over the legalisation of same-sex marriage have been mirrored in Frankston and the Mornington Peninsula with local federal Liberal MPs Bruce Billson and Greg Hunt at odds on the contentious subject.

Flinders MP and Environment Minister Greg Hunt declined to be publicly outed as a supporter of same-sex marriage when asked by The News whether he supports its legalisation.

Mr Hunt was coy last week about his stance on the issue despite being named as “a same-sex marriage supporter” in recent months by the The Australian and The Age newspapers and the ABC.

Rather than answer the question Mr Hunt directed electorate office staff to refer The News to comments he made to David Speers on Sky News last Wednesday (12 August), the day after Liberal and National MPs spent six hours locked in behind closed doors talks to formulate a Coalition policy on the legalisation of same-sex marriage.

“I had a particular preference and that didn’t come about,” Mr Hunt said in the Sky News interview.

Mr Hunt’s refusal to publicly declare his opinion on same-sex marriage is the second time in as many months that the Coalition frontbencher has not answered a direct question from The News about his views on the matter.

Early last month Mr Hunt said he supported “a free vote (a conscience vote)” taking place whereby all federal Liberal MPs would be allowed to vote based on individual views rather than along party lines (‘Same-sex marriage views differ’, The News 7/7/15).

Prime Minister Tony Abbott, a long-time opponent of the legalisation of same-sex marriage, is understood to have stared down any party room suggestions for a free vote for Liberal MPs and instead favours a national plebiscite or referendum if the government wins a second term.

Dunkley MP and Small Business Minister Bruce Billson is on ‘Team Abbott’ with regards to same-sex marriage, telling The News he backed the Coalition’s policy of “maintaining the current definition of marriage” since this was “the undertaking given by the Coalition and many other members of parliament going into the last election”.

“I believe and understand that people should be able to love the adult their heart wants them to love,” Mr Billson said.

“There are very genuine strongly held yet diametrically opposed views on same sex marriage in most communities, including ours. These differing, heartfelt views expressed to me by members of the community were also reflected during the respectful six hour meeting held with my Liberal and National colleagues.”

Mr Billson favours “the formal recognition of same sex relationships” and said “going to a process after the next election that puts the question [on legalising same-sex marriage] to the people enables all individuals to have their say”.

His cabinet colleague Mr Hunt also tried to maintain a positive front about divisions within the Coalition, telling Sky News: “I like deeply the idea of Australians and every Australian having the opportunity to participate in a grand democratic action.”

While the federal Liberal Party squabbles internally over the legalisation of same-sex marriage, Labor opposition leader Bill Shorten has vowed to enact legislation to legalise same-sex marriage within 100 days of Labor winning government.

Mr Shorten and Isaacs Labor MP Mark Dreyfus attended a marriage equality rally in Melbourne on Saturday (15 August) and the opposition leader said Labor would follow the likes of the UK and the US and legalise same-sex marriage without a plebiscite or referendum.