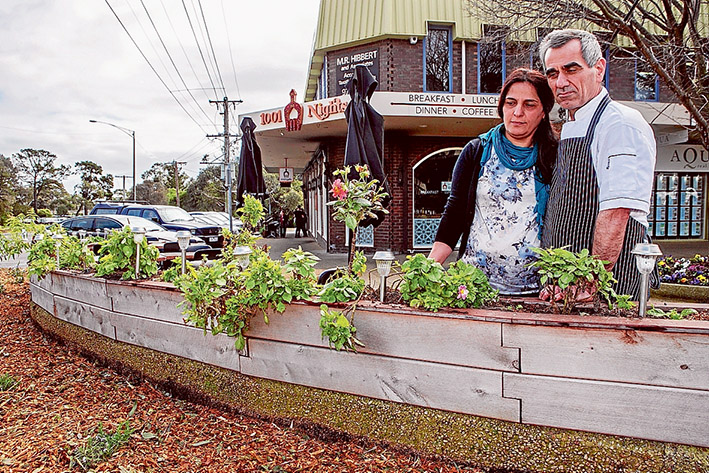 A MT ELIZA restaurateur has been billed $2000 by Mornington Peninsula Shire to reinstate a garden bed outside his eatery.

The fine comes after the council last week ripped out his well-established kerbside vegetable and herb patch saying it had been planted without approval.

Marc Syawish, who has run 1001 Nights, near the intersection of Mt Eliza Way and Canadian Bay Rd for the past two years, said council workers on Wednesday moved in to strip his plot and replace it with native plants.

He said he was devastated at losing verdant bunches of spinach, broccolini, silverbeet and wild rocket – which were dumped unceremoniously into a hopper.

Letters from the shire warning him of their visit mentioned an assessment would be done on the costs of replacement works, but Mr Syawish did not anticipate it would be $2000. He said his garden was well regarded and appreciated by passers-by and used in his own cooking, especially dips and salads which “tasted much better than bought produce”.

Mr Syawish said it had cost him about $8000 to make the garden, with a retaining wall, irrigation system, mulch and advice from a landscaper and gardener. It is all now lost.

He said shoppers “would often pop in to ask if they could pinch a bit of rocket or some of the vegetables and I would say ‘Sure, go ahead, help yourself’.”

“A lot of people just liked sitting out there because it was green and country-like.

“I realise I was probably not allowed to install the garden, but I was trying to do something for the community. I certainly didn’t see any harm in it.”

“Works of this nature require approval to ensure appropriate consideration is given to public safety, consistency with township plans, preserving site lines and adhering to the expectations of the broader community,” Mr McDonagh said.

“Shire officers have worked with the business to resolve and reinstate the garden bed. These works have the support of the Mt Eliza Chamber of Commerce and followed numerous community requests for action.

“The business has agreed to pay for the reinstatement costs, and the shire will return the plants and materials to the business should they wish to keep them.”

Facebook posts confirmed the garden’s popularity, with 115 likes: Karen de Jong: “Looks great, more shops and restaurants could do this.”

Teresa Pugliese: “Fantastic idea, hope others do this also.”

Pamela Robinson: “This is a great idea in Mt Eliza Village.”

But later comments were scathing of the shire’s actions.

Vicki King: “So sad to hear of and see your beautiful garden removed by the council. Where is the logic? Most loveliest corner of Mt Eliza – now reduced to same, same.”

Lorna Westley: “So sorry about your garden! I thought it was lovely and I can’t believe the council have removed it. Just stupid and mean.”

Paul and Jane Clasby were shocked at the garden’s destruction.

“It brought life to the village; it was an example of modern thinking whereas the council is taking us back to the past,” Mr Clasby said.

“The council is working off some kind of historic document saying this is what Mt Eliza should look like forever. But we should be breathing new life into the place. I don’t know what their priorities are.”