Eagles just manage to hold on 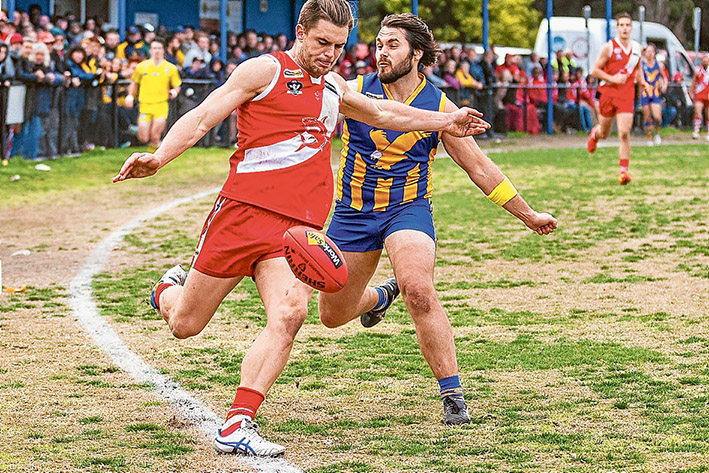 SOMERVILLE will play Rosebud in the second semi-final next Saturday at Rye’s RJ Rowley Reserve after holding off a late charge from Sorrento in the Nepean Division qualifying final.

Leading by four points at the final change, Somerville kicked three goals in the opening eight minutes of the final quarter to open up what appeared to be a match winning and game-high 27-point lead.

However, as it so often has done this season, the Eagles took the foot off the pedal and allowed Sorrento back into the contest.

The Sharks responded with three quick goals of their own to reduce the margin to nine points, before the Eagles extended it back to 15 midway through the last.

Life was breathed back into the contest at the 23-minute mark after goals to Myles Pitt and then a real lifter by coach Troy Schwarze reduced the margin to a single point.

Eagles coach David Hirst, whose attack on the footy was vintage throughout the contest, earned a head-high free kick at the 27-minute mark of the last and converted to extend the lead back to seven points.

Sorrento will play Red Hill in the first semi-final at Tyabb on Sunday after the Hillmen led all afternoon to beat Hastings.

After just 12 goals were kicked in the opening three quarters, the qualifying final opened up in the last with 11 majors.

It also had the top three players on the ground in Daniel Grant, Luke Tapscott and Jon Croad.

Grant was superb from half back and through the middle of the ground and finished with 26 possessions.

Tapscott was a bull through the middle and hit the scoreboard with a game-high three majors and Croad was outstanding for two quarters in the back half and in the last quarter in the ruck.

After watching Croad dominate early, Somerville made a master decision to push Ben Sedgwick forward and play defensively, while trying to hurt him offensively too. Sedgewick booted a goal.

Grant was the best player on the ground, despite some of his own teammates disagreeing with the decision.

The Eagles had a spread of good players, Tim McGenniss being the best of them. Timmy had a poor last quarter though with just two possessions after collecting 19 in the first three quarters.

Rowan Hogenbirk looked 80 per cent fit with a thigh strain but still collected 20 touches, Luke Collie was outstanding in the back half and Todd Farrelly had the better of Myles Pitt in a great contest.

The turn in the match in the last quarter come from arguably the oldest player on the ground.

Held together with strapping, Leigh Stewart wound back the clock and had 10 possessions in the last quarter and five centre clearances. He willed his team forward on countless occasions and was the difference when it mattered.

The Eagles will be glad to get that final out of the way. Their skills below their knees was poor in the opening three quarters and their decision making going forward of centre was too delayed. It allowed Sorrento to get numbers back.

Pressure of finals will ensure below par skill level. However, Rosebud is the best pressure side in the business and they will make Somerville pay this weekend if they don’t sharpen up.

Again, the Eagles need to play for 100 minutes. They almost learned the harshest of lessons when Sorrento hit back when it appeared the game was over.

Sorrento will go into the first semi final this weekend without their most consistent player of 2015, Tyrren Head, who went off the ground early in the second quarter with a shoulder injury. He won’t play again this season.

Leigh Treeby missed with a hamstring injury. He might play this week, however, will miss the preliminary final due to a wedding in Bali.

Guy Stringer, fresh from surgery to reattach his bicep to the bone, will play this week in his 401st game.

The Hillmen set up the win with a blistering six goal to zip first quarter. The Blues looked flat while the Hillmen set the tone with relentless pressure.

The Blues were able to reduce the margin to 38 points at three quarter time, before dominating the opening 18 minutes of the last quarter.

Red Hill booted the last four goals of the game to record what was a deserved, comfortable victory.

Red Hill’s defence was superb, led by Dan McNamara, who had 29 possessions.

Jake Mold was sensational across half forward and Peter and Marcus Dal Lago dominated.

Jake Mitchell was in total control in the first half and Matt Vagg and Harry Larwill were a handful in attack with five goals between them.

Michael Dillon sent a shock through the Red Hill camp last in the game when he came off with a knee injury, however, there was good news after the game with no structural damage reported.

Paul Rogasch was magnificent for the Blues – he finished with four goals and 25 posessions playing back, forward and midfield.