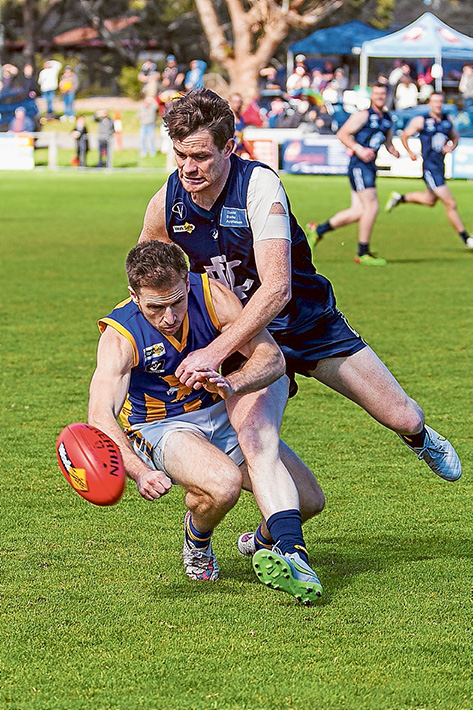 ROSEBUD is now raging hot favourite to win the Nepean Division premiership after beating Somerville for the third time this season.

The Buds led for all but two minutes of the second quarter of Saturday’s second semi final at Rye’s RJ Rowley Reserve, eventually winning 10.17 (77) to 9.7 (61).

While the Buds advanced straight to the grand final, Somerville will play Sorrento in this Saturday’s preliminary final at Tyabb.

Rosebud was always in control of the match against Somerville and never looked as though they were going to lose it.

Coming off a bye and two 100 plus point wins against Hastings and Tyabb in their last two matches had zero impact on the Buds, who won the game with bigger, stronger bodies and a greater desire for the contest.

The likes of Rohan Forrest, Nick Boswell, Greg Bentley, Jason Bristow, Brad McDonald and Rhys Bancroft were just too strong and powerful for their Somerville opponents.

The Eagles love to get on the outside and run and carry the footy, however at no stage were they given that opportunity on Saturday.

Rosebud coach Nick Jewell wanted a tough, inside game of footy and that’s exactly what he got.

Somerville has averaged 16 goals a match this season but on three occasions in 2015, they have not been able to boot more than nine against Rosebud.

Keegan Downie, who is a natural forward and started in attack, found himself in defence minding Luke Rowe. Rowe had zero impact on the match, such was the great job that Downie did.

Nick Boswell was brilliant. He gained more meterage than any other player on the ground, waltzing around opponents and steaming out of defence as though the Eagles’ forwards were witches hats.

Every time Tom Baker went near the footy, he had two or three opponents, which allowed Lachy Armstrong to get on his bike and be the ‘go to’ at high half forward. He worked tirelessly.

In the ruck, Ben Dwyer was clearly the best big man on the ground. He dominated against both Justin Farrelly and Scott Simpson. His work around the ground was also outstanding.

The best player on the park was Forrest. He finished with more than 25 touches and three goals. His work at stoppages was simply awesome. He was unstoppable.

The Somerville playmakers were all well beaten. Tim McGennis had just 19 possessions, many of which were ineffective. Rowan Hogenbirk had 17 and was more dangerous in attack than he was on the ball. There is no doubt that he is still struggling with the thigh injury and has no power to break away from stoppages.

Josh Collie was quiet with 13 touches and Justin Allsop had nine.

Adrian Speedy and Ben Sedgewick were clearly the best players for Somerville, while Josh Westerman was also superb, either across half back or through the middle of the ground.

The Eagles just didn’t have the ability to work their way out of the tough situation. Players got frustrated with the lack of space and constant pressure. Some were simply unable to find another gear.

The reality is that finals footy is completely different. When Sorrento turned up the heat in the last quarter in Somerville’s first final, they wiltered under the pressure. Luckily, the Eagles were able to sneak home.

On Saturday against Rosebud, the Eagles couldn’t handle the pressure again. This doesn’t come down to ability, it comes down to mental toughness. Somerville has a very short amount of time to develop a tougher mindset to be able to cope with the pressure.

Sorrento will get another crack at Somerville in this Saturday’s preliminary final after tipping Red Hill out of the finals on Sunday.

The Sharks proved yet again that they can never be underestimated, jumping the Hillmen early and going on to record a comfortable 18.8 (116) to 9.16 (70) victory.

The Sharks were never troubled by the Hillmen, who went into the game as favourites.

Red Hill had the aid of the breeze in the final quarter but Sorrento pushed hard against the breeze and recorded a solid victory.

Somerville has beaten Sorrento on three occasions this season, however, the Sharks will go into Saturday’s prelim chock-full of confidence.