Stonecats in the big dance 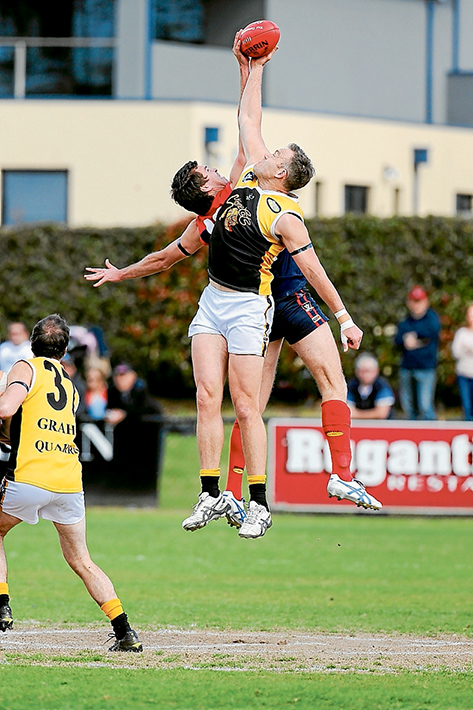 FRANKSTON YCW advanced straight through to the Peninsula League Grand Final in a fortnight after holding off a fast finishing Mt Eliza on Saturday at Frankston Park.

As is often the case at the Kars St oval, the wind was storming off Port Phillip Bay and charging towards the Kars St end – the end Frankston YCW kicked to in the opening quarter.

The Stonecats took advantage of the conditions, booting five goals to one in the first 30 minutes and opening-up a 23-point break. It was a lead that they were never to relinquish.

Luke Collins and Scott Macleod (two goals) provided enormous drive through the middle of the ground, Anthony Bruhn made it 11 goals in two finals with four against the Redlegs and Byron Barry and Daniel Waddell controlled things in the back half of the ground.

Waddell needed to stop Justin Van Unen to help his team advance to the grand final and he was able to achieve that, restricting the century goal kicker to just two majors.

Craig Nankervis was again at his best, winning his own footy and setting the standards for the rest of the team.

Mt Eliza were always going to come back with the aid of the breeze, however, they weren’t able to hit the scoreboard as often as they would have liked in the second term.

Despite getting enormous drive from the back half of the ground, especially through Karl Lombardozzi, Sam Gill and Darren Booth, the Redlegs really felt down across half forward.

Dave Barton and Jimmy Clayton did all they could through the middle, however, outside of Van Unen, the Redlegs just didn’t look dangerous.

The Redlegs need to find other avenues to goal.

The Stonecats went into the game without VFL-listed players Anthony Barry and Lachlan Wallace. Depending on how deep the Western Bulldogs and Collingwood reserves go into the finals will depend on whether they are available for the Peninsula Grand Final.

Mt Eliza will play Mornington in the Preliminary Final after the Doggies knocked Edithvale-Aspendale out of the finals race on Sunday in the First Semi Final.

The Doggies needed a shot in the arm after the first 15 minutes and came in the form of man mountain Michael Gay, who dominated in the ruck.

Mornington’s bookends were superb also. Jackson Calder booted six goals for the winners and at the other end, Adam Symes blanketed the Edi-Asp forwards.

James Cameron was also superb for the Dogs, collecting more than 20 possessions and kicking three goals, while Joel Miller and Ben Wells were dominating by the final siren.

Jai Haddock provided plenty of run and drive from the defensive end and Jake Smart worked hard in the front half.