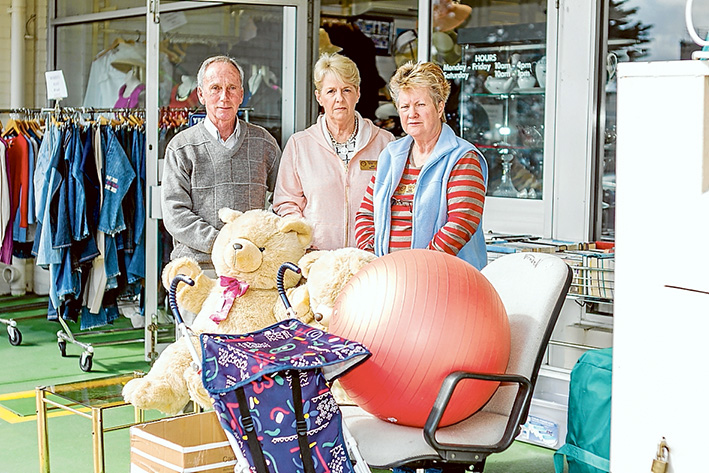 THIEVES have stolen an estimated $20,000 worth of donated goods from the Southern Peninsula Community Fund Op Shop.

At least three vehicles have been photographed making regular raids on goods left outside the shop overnight.

The thefts over the past 12 months has short-changed the long-serving Rye charity of money needed for worthy projects and denied needy families and customers of affordable clothing and bric-a-brac.

One couple have been stealing the lot and then returning the following night to bring back goods they did not want.

The shop’s managers believed the stolen items are sold at weekend markets, online and at garage sales.

Op shop president Graham Fitzgerald admitted the charity had been having “a disastrous time with thieves”.

“We are appealing to the public to help us catch them or stop them because they are ruining business for us.

“It’s not just a few bob they are stealing, it’s getting to be a lot of money and that money is supposed to be going back into the community.”

It is believed the thieves usually arrive at the shop at about 7pm, when a vehicle parked out the back would not arouse suspicion.

One lot of thieves wear torches on their caps to make it easier to rummage through the donated clothing.

The shop – affiliated with the Southern Peninsula Community Fund – has a history of solid fundraising, including donating more than $500,000 to the Rosebud hospital for its CT scanner.

Upgraded security measures, including CCTV cameras, have been marginally successful.

“We put up the cameras when they were getting out of control, but they lasted only two nights before someone snipped the wires,” Mr Fitzgerald said.

A camera designed to operate without wires was provided by Rosebud police but it lasted just three days before being vandalised.

“We have a big bin where we prefer people to deposit donated goods, but it is easier for people to drive around the back and that makes it easier for the thieves,” Mr Fitzgerald said.

“If we put a big padlock on the gate maybe the thieves would distribute all the stock around the car park. And, when we’ve got generous volunteers putting in their time, yet their first job is cleaning up the mess with the eyes picked out of everything, it’s upsetting.”

Mr Fitzgerald said a volunteer had found a woman in her 60s on the ground beside her trailer after apparently falling while stealing donations.

“The volunteer helped her to her feet and took down her car’s registration number before she drove off,” Mr Fitzgerald said.

“We have discussed all our options with the police, such as putting notices up for customers to please drop of their goods during business hours, but so far we are up against it.”

Leading Senior Constable Scott Hanley, of Sorrento police, admitted being hampered by grey areas in the law. “At what point does ownership of the stock transfer over?” he asked. “It’s a tough one.”

“They need a gate or a chute where people can slide their donations, to keep it away from thieves.

“We patrol there regularly and, if we catch anyone stealing, they will be charged with theft and trespass if they are found on op shop property.”

The suspect cars are a white 1999 Suzuki Grand Vitara, a fawn 1999 Mitsubishi Magna and a black 2003 Renault Convertible.