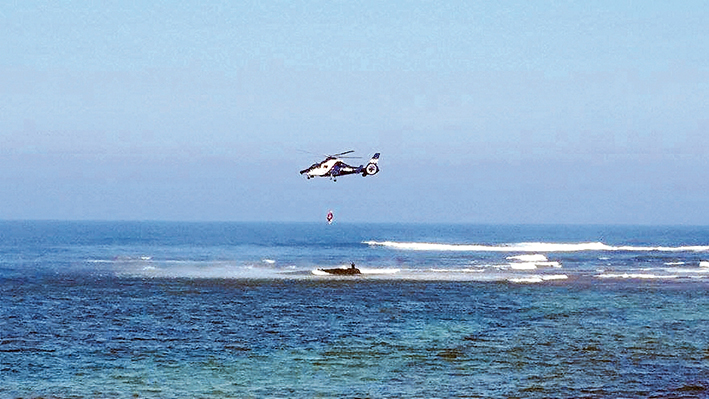 TWO snorkelers were rescued by the Police Air Wing Saturday afternoon after being stuck in an inlet near Tasman Drive, Rye.

The Frankston couple were with a Richmond man – all aged 23 – when the woman was dumped by a large wave about 5pm.

This inflamed an asthmatic condition causing her distress and she and the man managed to swim to an isolated inlet to shelter in a cave. The receding tide left them high and dry – but unable to get to safety.

Senior Sergeant Steve Duffee, of Rosebud police, said their friend managed to scale the cliff while it was still light and alert authorities with the help of a passing hiker.

Rye CFA captain Glenn Diamond said his crew erected lights so the helicopter crew could see the cave, allowing them to winch the couple to safety.

“If we’d had to use the high-angle crew it would have been a problem because it was dark and the cliffs are sharp limestone,” he said.

The couple were taken to Stringer Rd reserve, Sorrento, and then Rosebud hospital for observation. The other man was able to drive home.

The 14-year-old boy and girl had wandered away from their carer about 1pm and walked out to an exposed Mushroom Reef about 400 metres from shore. They were cut off when the tide came in and waves started to break over the rocks.

The alarm was raised and the Air Wing was able to winch the teenagers to safety.

Senior Sergeant Duffee cautioned water users to keep an eye on conditions and alert others to their whereabouts.

A Red Hill man in his 70s was airlifted to the Royal Melbourne Hospital with a suspected broken leg and dislocated shoulder after being injured when his his ride-on mower tipped over, 3.10pm Sunday.