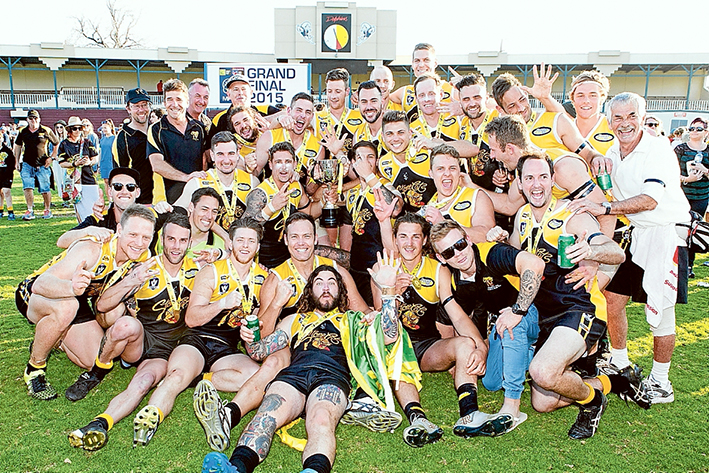 FRANKSTON YCW capped off a wonderful season by winning the Peninsula League premiership by a whopping 87 points over Mornington on Sunday.

The Stonecats have been by far the best side in the competition this season, having had a 77-point average winning margin this season.

On Sunday, it was much of the same.

The Stonecats were prepared, disciplined, clinical and professional, a trademark that has been with this clubs since the years of Josh Kendall, Paul Theobald, Joey Lane and Mark Berenger.

It graduated through the ‘Bugsy’ Barry years and is now front and centre in the current coach Scott Mathers. Mathers worked his way through the Under 18’s, like Buggsy, and has now coached back-to-back flags.

Mathers has ensured that this group stays hungry and professional.

When the final siren sounded on Sunday, players swarmed to tough midfielder Luke Collins, who was under a pack all day clearing the ball out to runners.

Collins had lost his father the night before the game – the passion for a teammate was testament to the YCW Football Club.

From the first bounce, there was a commitment to the cause from the Stonecats – they were first to the footy, relentless in their pressure and disciplined to their structures.

While Mornington was able to withstand the pressure in the first quarter, they just couldn’t maintain it.

The Stonecats won the clearances, 33 to 29, such was the battle between Ash Eames and Michael Gay. Eames won the duel.

The Stonecats dominated the inside 50s, 55 to 38. Mornington’s entries were more a kick and hope arrangement.

Jack Mazurek was given the VCFL medal for best on ground – he was super also.

Jesse Coghlan was superb on Jackson Calder, Kevin Lylak, Byron Barry and Anthony Barry dominated in the back half. Ryan Santon and Brenton Credlin are two of the most outstanding youngsters in the competition and they were superb in the Grand Final.

Scott McLeod was brilliant when the game needed to be won in the first half with 12 possessions in the opening hour and Jai Coghlan was one of the best five players on the ground. Talk about leadership, Coghlan had it in spades.

Ben Tellis is a star. If you’re contemplating retirement legend, forget about it. He kicked two goals and had more than 15 possessions.

Daniel Waddell, despite all the years he has been at YCW (with a Dromana flag in between), finally won his first senior flag with the Stonecats. Knee injuries cost him in the past.

Craig Nankervis was simply brilliant. His work rate, along with Collingwood VFL player and local boy Lachy Wallace (23 possessions), were instrumental in the win.

It was a tough day for the Dogs.

Danny and Dale Nolan could hold their heads high after the game, along with Adam Symes, who is as tough as a cat’s head.

Jai Haddock was tireless, tough and relentless and Ryan O’Dell was superb. The Dogs can build their club around these two blokes.

The season belonged to the Frankston YCW. They were a pleasure to watch, on every occasion.

Congratulations needs to go to club president Gerry Wintle and his team – what a well-run, professional club that just oozes success.