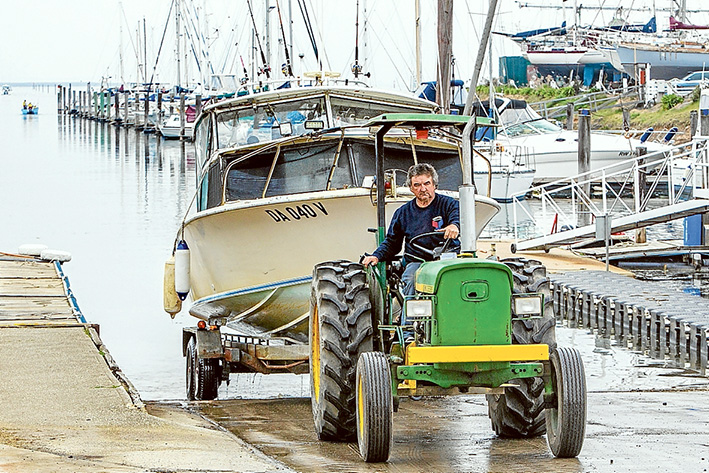 Standing at the back of his boat, Cranbourne man Howard Fisher strained to pin-point the muffled sound in the dark, every nerve on edge.

“I had been asleep in my boat but I woke up and went out and I thought I heard a voice in the water,” he said Monday.

“I yelled out: ‘Is someone there?’ and the voice came back again.

“Suddenly I could see a couple of men in the water as they drifted down past me; it’s hard to say how far because distances are deceptive in the water.”

Conditions at 3.20am were dark but still, with wind speeds, according to the Bureau of Meteorology, not strong enough to register on the gauge.

“I called out a few times to try to work out their position and then I saw a head bobbing and knew where they were,” Mr Fisher said.

“I woke up my friend and we pulled the anchor up and got the boat going and managed to get to the two men.”

That was the rescuer’s harrowing description of a tragedy which claimed the life of Koo Wee Rup man Ian McBride, 53, who drowned despite the best efforts of his friend of 40 years, Colin Madden, on a fishing trip gone wrong.

Mr McBride was described on Channel 9 news by his partner, Cherylee Kerslake, as “a big gentle giant most of the time, my grandkids absolutely loved him and he would do anything for anyone.”

The men had left Tooradin after midnight to fish off French Island.

It is believed Mr McBride fell overboard and that Mr Madden jumped in the dark waters to save him. They became separated from their cabin cruiser and drifted slowly in what the Coast Guard estimates as a three-knot tide.

It appears Mr McBride died with his friend clinging onto him. “In my view the dead man saved the life of the living man,” long-time fisherman Mr Fisher said. “He was trying to save the life of his mate and his mate saved him.”

Once alongside, Mr Fisher managed to haul Mr Madden aboard. He was suffering hypothermia after about an hour in the 13 degree water. The body of Mr McBride could not be retrieved until the Coast Guard arrived at 3.40am.

“I am still trying to put the pieces together,” Mr Fisher said Monday. “It was lucky we found them when we did because the fog came in about then making it very hard to see anything.

“We sat and waited for the Coast Guard.”

Officer Jeremy West, who is based at Hastings, said the Coast Guard received the distress call at 3.30am and was at the rescue site by 3.40am.

He said Mr Madden, of Tooradin, had become disoriented after jumping in the water to save Mr McBride and could not get back to the boat.

He said the tidal outfall was not as strong in northern bay area, meaning the two men did not drift as rapidly with the tide as they would if further south, which would have made rescue even more difficult.

“They had drifted about 600 metres and had been in the water for about an hour, with the deceased secured to the rescue boat and still in the water when we arrived,” he said.

The men were brought ashore at Hastings and Mr Madden taken to Frankston hospital for treatment. He was expected to be released Monday.

Mr West said police were preparing a report for the Coroner.