Tug-of-war over reef and coal 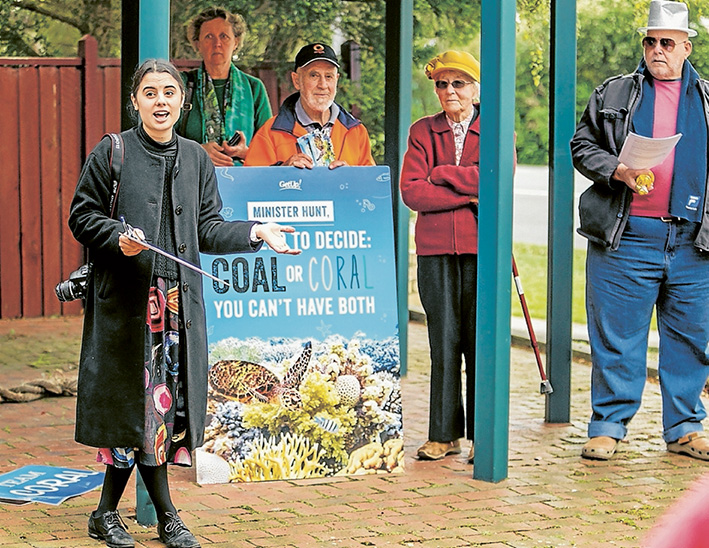 ANTI-coal activists have rallied outside the Hastings office of local MP and environment minister Greg Hunt for the third time this month.

Last Wednesday morning, members of national lobby group GetUp held a “friendly tug-of-war between ‘Team Coal’ dressed in black and ‘Team Coral’ in tropical colours” as part of a campaign to “protect the Great Barrier Reef” and protest about Mr Hunt and the Coalition government allowing more coal projects in the Galilee Basin in Queensland.

Sam Regester of GetUp said the playful tug-of-war game “highlighted the serious decision the minister had to make between greater action to protect the Great Barrier Reef and allowing more coal projects that placed the icon at risk”.

“Minister Hunt must decide which side he’s on – will he stand with the community and protect the reef or side with the vested interests of the mining industry and risk its ruin,” he said.

“Mr Hunt has vital decisions to make on whether he should approve the massive Carmichael mine in the Galilee Basin and a proposal for two million tonnes of dredging in the Great Barrier Reef Marine Park.

“The Queensland government’s own report card into the state of the reef’s health released last week found our natural wonder wasn’t doing well. We need greater action to protect the reef, not more dredging, ports and coal projects that will threaten its future.”

The first protest this month was on Wednesday 2 September when protesters from GetUp carried a crate of coal into Mr Hunt’s office, which elicited the now-famous comment from one of his staff members, executive officer Denise Garnock, “so you’re going to pollute our office with coal?” and a furious reaction from Mr Hunt who accused protesters of intimidating his staff.

Peninsula GetUp member Simon Hawking hit back, saying there were three police officers “happily chatting to the crowd” and they would have been called in to the office if intimidation had occurred.

The second protest was on Wednesday 16 September, a bit of a fizzer as few people turned up although GetUp members and sympathisers have been stopping residents in Hastings’ main street and talking to them about the reef and coal on several days during the month.

Queensland environment minister Steven Miles last week released the annual report about the health of the reef, which stated the overall condition of its inshore marine environment remained poor.

The report assessed run-off and the reef’s condition between 2009-14 and found that sediment, nutrients and pesticide loads had decreased but had fallen short of meeting targets.

Mr Miles said there was more bad news than good in the report. “The results are far from our targets, and progress to these targets flatlined in the period 2013-14,” he said.

In July, the United Nations World Heritage Committee decided not to list the reef as “in danger” but Mr Miles said international concern about the reef was justified.

“The report shows progress on meeting targets has stalled, and UNESCO’s interest was the right thing,” he said.