Big bill to save Portsea beach 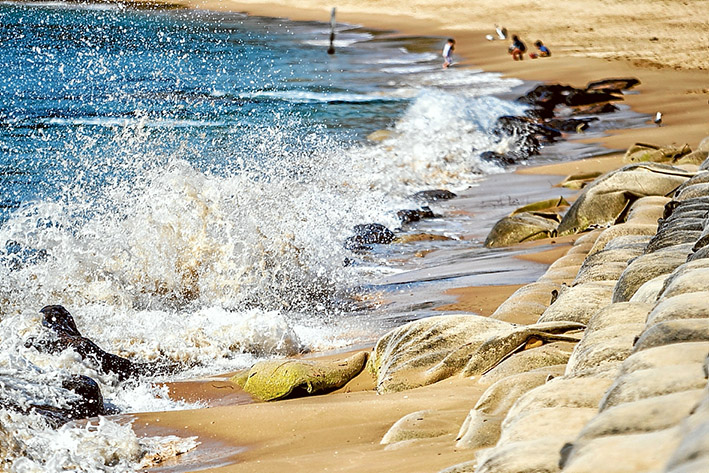 THE state government is considering options to stop the ongoing destruction of Portsea’s iconic front beach after it received the findings of a $300,000 wave monitoring and seabed modelling study commissioned mid-2014.

The study by Worley Parsons was recently handed to the government and environment department bureaucrats. They must quickly decide how to save the 1000-sandbag protection wall and stop the destructive swell now spreading both east and west.

The sandbag wall may only last another 18 months and it will be expensive to replace.

Storms in May removed thousands of tonnes of sand and foredune from the eastern end of the beach, exposing the roots of old trees as well as rocks under the foredune, destabilising temporary steps (which have been closed) and damaging more than 20 of the 1000 sandbags.

A huge section of foreshore at the eastern end collapsed onto the beach and was washed away. Damage is also being done to Fishermans Beach west of the pier.

Storms exposed rocks not seen in living memory as well as the remains of an old jetty.

The News understands that options being considered include:

A temporary fix may be the placing of sloping rocks in front of the sandbags.

The Worley Parsons study is the third into the problem and was commissioned following pressure from residents, aquatic businesses and Nepean Ratepayers Association.

It measured currents, waves and tides, and has modelled the wave “climate”, including seasonal wave patterns.

It has confirmed a 2013 report by environmental consultancy Water Technology, which found that changes to the seabed had increased the size and velocity of waves reflected onto the beach.

The government commissioned a second study, by the CSIRO, which found that dredging in 2008-09 may have contributed to larger and more powerful swells.

Colin Watson of Nepean ratepayers, a key driver of the reports, said a large sandbar off Portsea had not been dredged but had changed shape.

“We have consistently said we want our beach back, whatever the cause may be,” he said.

Mr Watson took up the challenge of lobbying the government for a solution when he returned to live in Portsea permanently in early 2012 after leaving as an 18-year-old.

“My father was a professional fisherman and later drove passenger ferries for 35 years,” he said. “Dad reckons he did about 65,000 trips between Portsea, Sorrento and Queenscliff but never saw waves like this hitting the beach.”

Mr Watson said there were refracted waves hitting the beach before dredging but now they were “sometimes enormous on an incoming tide”.

The Worley Parsons report is expected to be released at the end of October.