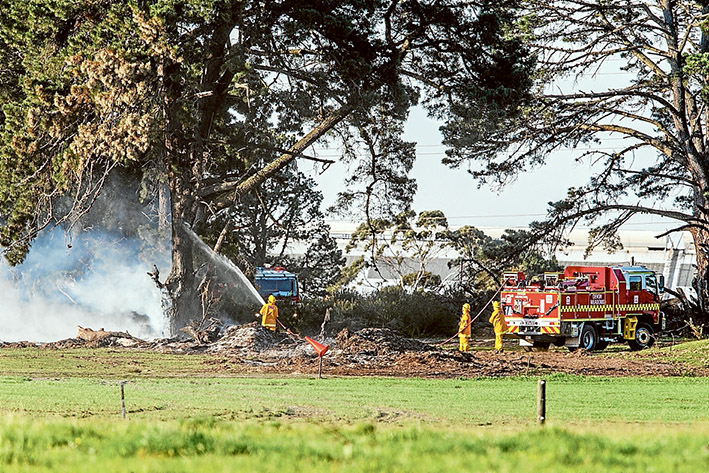 UP to 16 trucks were brought in to fight a grass fire last week at BlueScope Steel’s recreation reserve in Denham Rd, Tyabb.

The fire started at 6.30am on Tuesday and burnt out five hectares before being stopped after an hour about 300 metres from the BlueScope steelworks.

The fire was fanned by a strong northerly wind on an unusually hot October day which saw fires burn out of control across the state.

“We turned them back because we had it under control and 16 appliances remained for the rest of the day,” he said.

“BlueScope sent two bulldozers to cut a swathe around the fire and helped us contain it.”

Tyabb CFA Captain Stephen Birkinshaw said fire crews “hit the fire hard and fast and got it under control early”.

He confirmed Mr Haynes’ view that landowners should “plan for the worst and hope for the best” in planning for the fire season.

“Don’t be complacent,” Mr Haynes warned. “Conditions for a serious fire could occur at any time. People should prepare diligently and ensure they keep a close eye on the weather.”

The cause of the fire is yet to be determined, but is not regarded as suspicious.