Fire: a catastrophe in waiting 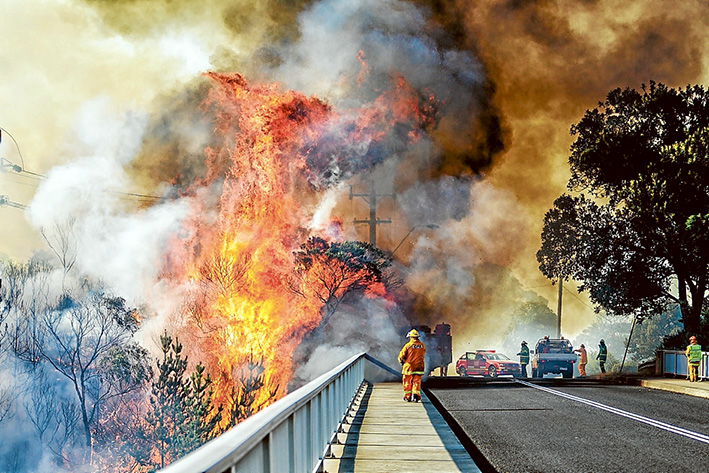 Dire warnings: A fire that started along the Mornington Peninsula Freeway at Dromana quickly spread into nearby Heronswood, destroying a thatched roof cafe. Although not officially listed as being deliberately lit, an arson expert says motorists reported seeing multiple along the freeway. Picture: Yanni
Share
Facebook Twitter LinkedIn Pinterest Email

INVESTIGATIONS into the risk posed by bushfires to the proposed Arthurs Seat Skylift have highlighted the dangers to residents living in or around the precinct.

The Mornington Peninsula is regarded as “one of the most bushfire-prone areas in the world”, according to the municipality’s official fire management plan. And the towns around Arthurs Seat and its slopes have been assessed as being under “extreme” risk of “catastrophic” bushfires.

The register is part of the Mornington Peninsula Shire’s fire management plan and bases its predictions on the history of past fires in the area.

The plan has a list of “Neighbourhood safer places – places of last resort” where refuge can be sought during fires.

There are no refuges listed for anyone seeking shelter from bushfires at Arthurs Seat, Red Hill or Main Ridge.

Ironically, the Skylift’s upper station may be the only reasonably safe refuge available.

Janet Stanley, a specialist in arson who has been widely quoted by opponents of the gondola ride, believes more tourists being attracted to the area will also increase the risk of bushfires being deliberately lit.

“Most arsonists light fires close to an urban setting. Bringing large numbers of visitors to the heavily forested area close to an urban environment would greatly increase the risk of an arson attack in the area,” Dr Stanley said.

Since 1997 there have been three recorded bushfires, which burned between 160 and five hectares but which were brought under control without any great loss to property.

Major fires listed in the shire’s fire management plan start from Black Thursday in February 1851 – a statewide fire that saw countryside around Western Port covered by “raging flames” – to January 2008 when a 48ha fire affected private and government land in Boundary Rd, Dromana.

The plan does not include a February 2013 fire that began on the Mornington Peninsula Freeway at Dromana and spread to the historic Heronswood property, completely destroying its thatched roof cafe.

A fire that started in a wood yard at Hastings in January 2015 quickly spread into Warringine Reserve, threatening nearby houses and Crib Point.

Although relatively quickly contained, the fire was heading towards the steel works and Esso’s gas plant at nearby Long Island Point, which is listed as a major hazard facility.

Last week Nepean MP Martin Dixon warned that the peninsula’s green countryside was deceptive: “Fire authorities say a major fire is now not a matter of if, but when.”

Mr Dixon told Parliament he had “a number of worries regarding the fire season this year”.

“Locals do not believe the forecast because the forecast last year was very inaccurate. The tens of thousands of city day visitors and renters know little if anything about [fire] awareness,” he said.

“The southern peninsula is one of the three most dangerous fire timbered areas, very explosive tea trees, massive seasonal population increases and totally congested freeways, roads and streets, and, being a peninsula, there is a lack of exit and access routes for emergency vehicles.”

Mr Dixon complimented CFA brigades on their preparedness but called on “all relevant government department agencies and ministers to facilitate more emergency clean-ups and to educate residents and visitors about their responsibility to clear up their land and have a thorough [knowledge] that if a major fire starts and you are on the southern peninsula, you will not be able to leave”.

“There will be no escape, so plan accordingly,” Mr Dixon said.

While opponents of Skylift’s gondola point out the possible dire consequences to people sheltering from raging fires at either its upper or lower stations, the risk to life and property goes well beyond this one development.

“It is hard to comprehend why a gondola would be placed in an area of such fire risk, potentially placing many more people in danger and increasing the risk to the local residents, firefighters and the environment,” said Dr Stanley, who is Monash Sustainability Institute’s chief research officer.

“If a large fire occurred then other nearby localities would be also endangered, with potentially a much wider effect than the areas itemised in [the shire’s fire management plan].”

The gondola itself has been the subject of heated debate over its susceptibility to bushfire.

A separate bushfire emergency plan commissioned by Arthurs Seat Skylift describes how the company’s employees will respond to a bushfire threat before the arrival and handing over of control to emergency services.

The plan “has been designed to assist management to protect life and property in the event of a bushfire”.

The bushfire emergency plan comes with lists of contact phone numbers and colourful flow charts showing various actions and delegations should there be a fire. However, it provides no guarantees: “Ideally, instructions for how staff and Skylift visitors respond to a bushfire situation (evacuation or shelter-in-place) will be provided by emergency services personnel,” the report states.

“It must be recognised, however, that in some situations, emergency services will not be present and it will fall to the Arthurs Seat Skylift management (operations manager/chief warden) to determine a course of action.”

The plan says the pre-cast concrete upper station, which includes a cafe for 100 patrons, will be built to Bushfire Attack Level (BAL) of 12.5 and be surrounded by a “defendable area”.

Council’s fire prevention officer can order a clean-up of properties seen as being at risk.

The peninsula has two fire brigade groups, Western Port Group (13 brigades) and Peninsula Group (eight brigades). The 21 brigades have more than 600 firefighters, who respond to about 4000 fires and emergencies each year.