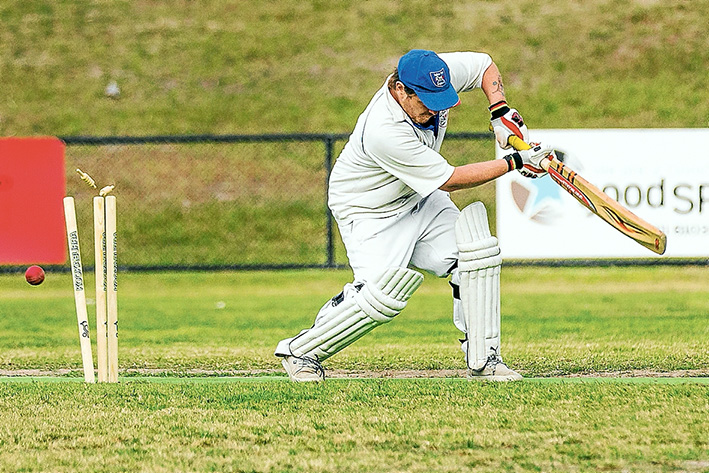 DROMANA is in a very unfamiliar position after two rounds of the MPCA Sub District season – on top of the ladder.

The Hoppers made light work of Hastings on Saturday, rolling the visitings for just 102.

Recruit Aaron Kaddatz once again proved he is going to destroy this competition after claiming 5/21, while Jeff Bluhm bowled 18 overs and snared 4/41.

Nathan Hunt top scored for the Blues with 32, while skipper Timmy Birch did all that he could with an unbeaten 28.

The Yabbies made just 106 in their first innings before the Frogs came out and blasted 55 in the final 16 overs of the day on day one.

The home side came out swinging on the second day too, racing to 1/208 in 42 overs before declaring.

The Frenchman got the job done for the Frogs, Rob scoring 82 and Travis 63.

Tootgarook used nine bowlers in the second innings to try and get the 10 wickets required for the outright.

James Holland-Burch prevented them from doing so with an unbeaten 45, while recruit Michael Edwards scored 39.

Ballam Park got the job done against Carrum Downs in a tight one, winning by just 11 runs.

Chasing 199 for victory, the Knights got there with one wicket in hand. At one stage the Knights were 8/179.

Jarryd Ward top scored for the winners with 47 while Zac Clements’ 24 batting at nine was match winning.

Stuart Swift was the pick of the Cougars’ bowlers with 4/58 while Ryan Lynch snared three wickets.

Frankston YCW didn’t have any problems picking up the runs required to beat Balnarring.

Chasing 136 for victory, the Stonecats resumed at 2/71 with Jason Bedford 32no. Bedford went on to make 59 while Paul Bradley scored 41.

The Stonecats called it a day with the score on 8/234.

Defending 9/316, the Buds bowled-out Skye for just 138. Jason Nagel bowled 25 overs and finished with 4/33, while Billy Quigley and Peter Doughty claimed a couple of wickets each.