The Basics: This could be the last time 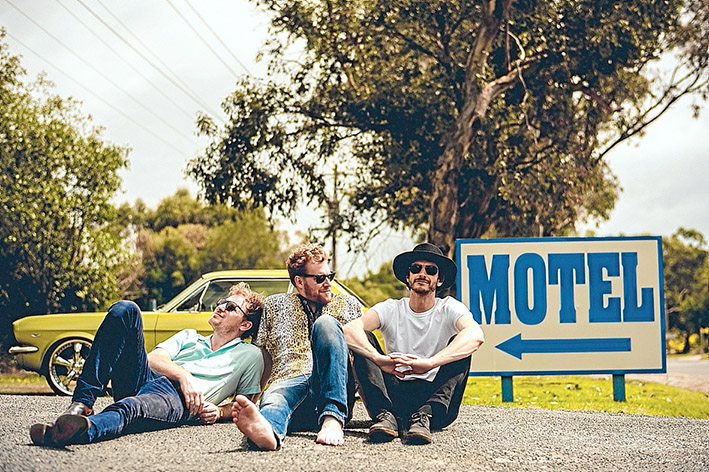 GOTYE has gone back to The Basics and the band is dropping in on Mornington as part of their national tour in support of their latest The Age of Entitlement album.

Guitarist Tim Heath says The Basics drummer Wally De Backer, known as the solo artist Gotye, is heading back to Australia from the US where he is recording the follow-up to his commercially successful Making Mirrors album which spawned the global smash Somebody That I Used To Know.

Heath says November’s Mornington gig, the last in the tour, will be “pretty energetic and perhaps emotional” amid hints The Basics may call it a day.

Although if the band does break up permanently it will not be due to any jealousy or bitchiness over De Backer’s success as Gotye.

Far from being somebody that Gotye’s long-term bandmates used to know, Heath joked De Backer’s modesty and ability to remain unfazed by commercial success means The Basics, who have been together since 2004, are able to work together again without any egomania dominating proceedings.

Heath admits though that he, De Backer and bassist Kris Schroeder now play shorter tours when they hit the road.

“I think we really enjoy playing together and in the last few years we’ve sort of done it sporadically and the tours have been shorter because the older you get the harder it is to go on the road. You get tired and grumpy more easily so we’ve sort of made them shorter so our tempers don’t flare as much.”

Gotye’s global success hasn’t put a downer on The Basics. Heath admits it was “surreal” but “fantastic” to see and hear Somebody That I Used To Know, featuring Kimbra, suddenly take off across the world.

“We had a three-year hiatus and in that time I was in France, Spain and Portugal and that was when the song really went big. I’d hear it on every radio station in those countries.

“Wally never really talks himself up and I don’t think he sees certain achievements that others would so highly. When he got nominated for a Grammy I was on the phone to him that day and having a regular chat. I didn’t know about it and he didn’t even mention it.”

As for The Basics the latest tour comes in the wake of the release of the band’s eighth album called The Age of Entitlement, a phrase used by the now departed Australian Treasurer Joe Hockey who described the country as “a nation of lifters, not leaners” when he delivered his controversial 2014 budget which many regarded as unfair on poorer Australians.

It’s a departure from The Basics’ indie-pop rock roots and sees the band addressing the state and shame of the nation as they see it.

Schroeder wrote most of the songs for The Age of Entitlement album before The Basics headed off to the UK to record the tracks at the Abbey Road Studios in London, made famous by The Beatles who often recorded there and named their 1969 Abbey Road album in its honour.

“Kris came back with some songs that were political and Wally and I looked at each other and went ‘this is a bit different’ but I think we all agreed that the sentiment was something we all shared and agreed on,” Heath said.

“The songs seemed to me not so much political but more social. A comment about culture and a part of the Australian psyche that was becoming complacent, complaining about things but not doing a lot about it.”

The opening lines from album opener Whatever Happened to the Working Class? leaves listeners in no doubt about who The Basics mostly blame for Australia’s cultural malaise: ‘Whatever happened to the working class?/We’ve got politicians sitting on their arse/Whittling away at the few rights that we’ve got left/I was listening to the radio and how big business stole the show and I wonder ‘who’s there to stop them now?’’.

The not so great Australian public are also condemned for their indifference to politics in the album’s lyrics.

Heath notes: “I think most Australians are very lucky to be able to live relatively comfortably and it’s quite easy to forget we’re quite safe in our houses compared to most people in the world and that things like big-screen televisions and swimming pools start to take up most of what’s been discussed or thought about by a certain section of the community.”

The Basics themselves decided to “have a go” at politics to show complacency enables politicians to often fail to represent their community’s best interests.

The Basics Rock’n’Roll Party registered to contest an Upper House seat at last year’s Victorian election. Heath says winning a seat was always a long shot but the party’s formation “was a way to show people could go out and become a politician and try to change things rather than just sit on the couch and complain about it”.

“It started off as an idea to show people who are generally pissed off with the state of Australian politics who feel disempowered somewhat that anyone can start a political party. All you need is members and then you’re on the ballot paper. We hoped that people would see that and think they may give it a go next time. So it’ll be interesting to see if it had any effect.”

Recording The Age of Entitlement was a dream come true for The Basics since the trio are big fans of The Beatles, Heath said.

“The first time we walked in it was pretty amazing. I was pretty speechless because everything is quite original but it’s also a working studio.

“You’re walking down the corridors and there’s old tape machines that have been used since the ‘40s and ‘50s and of course Studio Two where The Beatles recorded still looks the same so you look at photos of them and then you walk in there and it’s amazing.

“All the microphones are still there. For one take we did the engineer called for ‘the John Lennon microphone’. It’s really cool and neat they haven’t sold it or auctioned it off to a museum or something.”

“I recorded a couple of tracks on a piano they recorded A Day in the Life on … just to sit there … is kind of surreal.”

As hinted earlier, The Basics future days in the life are clouded but, if the Mornington gig is the end of the road forever for the band, Heath reckons The Age of Entitlement is as good a way as any to go out raging against the dying of the light (on the hill).

Not many bands speak out about how politics shapes culture now after protest music peaked in the 1970s and early 1980s.

“It may be one of the last records we make, I’m not sure,” Heath said.

“Maybe we thought it is time to maybe make a comment on Australian society. I think sometimes it is important for artists to make people think politically and socially … and show a different perspective on the world.”