Group goes heels over head against coal mine 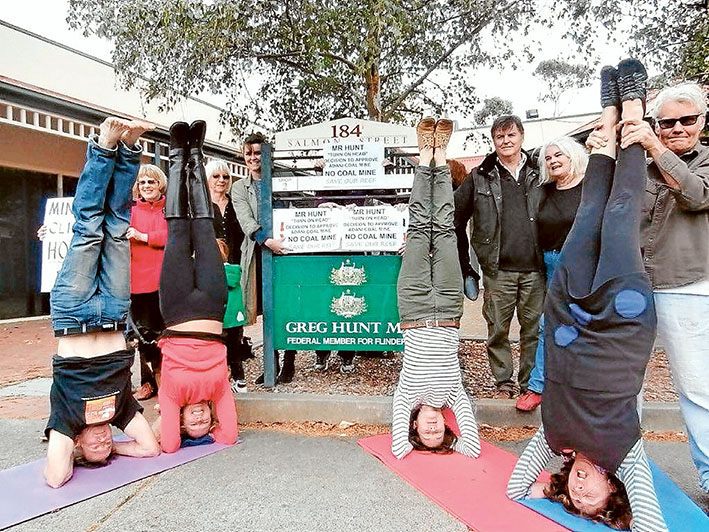 MEMBERS of a Somers yoga class are hoping to convince Environment Minister and Flinders MP Greg Hunt to overturn his decision to approve a massive coal mine in central Queensland.

On Monday they joined the list of groups and organisations that have used Mr Hunt’s office as a focus for their protests against the federal government and, in particular, its environmental policies.

Last week it was protesters dressed as angels climbing onto the roof of the office and before that deliveries of bags of coal. In May, police arrested leaders of a group of Christians occupying Mr Hunt’s offices in protest at the government’s asylum seeker policies.

However, all the recent protests have centred on coal from Adani’s Carmichael mine which will be exported from a terminal at Abbot Point, which environmentalists believe will damage the nearby Great Barrier Reef.

“It [Mr Hunt’s approval of the mine] was being discussed by members of the yoga class and we decided that standing on our heads outside his Hastings office was most appropriate, as Adani is an Indian company and yoga has its Indian origin,” Ms Wrigley said.

“We discussed joining [activist group] GetUp’s protests and standing around holding placards, but decided doing head stands would be a good way of getting it across to Mr Hunt to turn his decision on its head.”

Ms Wrigley said the yoga group – “we all live in Mr Hunt’s electorate” – intended to make standing on their heads outside his office “a regular thing”.

For his part, Mr Hunt says the Adini permit will be subject to strict environmental conditions.