Barney makes himself right at home 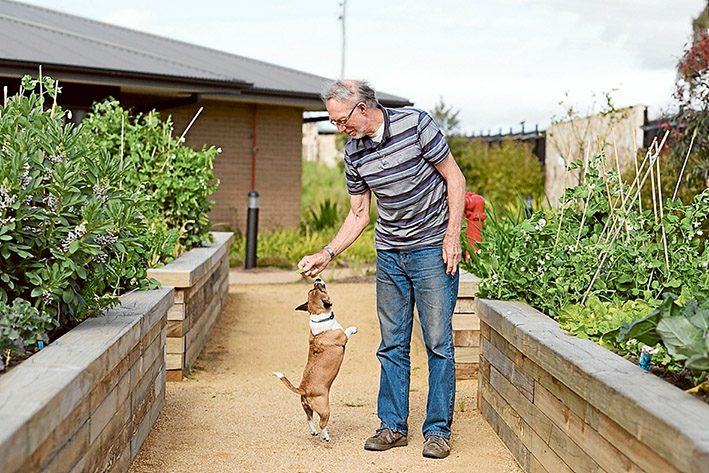 JACK Russell-cross Barney is still right at home with his master, Alex Downs, even though they are living in aged care.

And that companionship is doing both of them the world of good.

They live at Peninsula Grange Aged Care, Mornington, with Barney’s upkeep paid for by a Pets in Aged Care grant from Animal Welfare League Australia.

The money goes towards behaviour training for one-eyed Barney – the only resident-owned pet – who needs to be taught to eat on his own, rather than accompanying Mr Downs to the dining area.

“He’s a quirky little fellow loved by all the residents but, in the dining area, he gets so many tidbits that it’s not good for his health,” Peninsula Grange events coordinator Katie Turner said.

“He gets stressed when he’s not with Mr Downs and so we are going to use the grant to teach him to be comfortable when eating alone.”

She said this would preserve the pair’s close bond, and also ease the integration of more resident-owned pets into the Booker Av premises.

“Their health is of the utmost importance to the staff, as is the comfort and happiness of all our residents. So, it is critical that we have a process for managing pets here.’’

The money will pay for such things as live-in costs, vet bills, grooming, training, dog walking and feeding.

That’s all good news for Barney, 7, who likes the companionship of other residents almost as much as he does his master’s. “He seems to be sitting next to a different person every time I see him,” Ms Turner said.

“Directors of successful pet–friendly aged care facilities have told us that pets contribute to community feeling and encourage friendships between residents.

“When a resident is strongly bonded to their pet and the live-in pet situation is well managed, the benefits to that resident, other residents and staff should not be underestimated.”