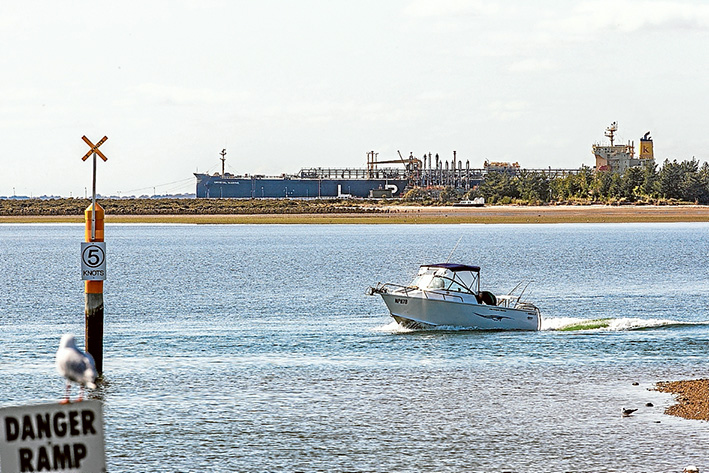 MELBOURNE needs two new ports – one at Hastings and one on the western side of Port Phillip – Captain Richard Cox told the Port of Melbourne Select Committee hearing in Hastings last week.

The committee is gathering information about the Labor government’s proposed long-term lease of the Port of Melbourne to commercial interests, and came to the peninsula for the first time to hear submissions from individuals, councils including Mornington Peninsula Shire and Frankston, and conservation groups.

Captain Cox, a Tyabb resident and former Port of Hastings harbourmaster, told the committee that bulk trade required waterfront space for silos and tanks with wharf loading and unloading infrastructure different from that used for containers.

He said Hastings should be developed as a container port, and the western side of Port Phillip – dubbed Bay West – should be for bulk trade “combining Geelong and Melbourne port facilities”.

After dumping plans for a container port at Hastings last year, the state government said Western Port should become a port for bulk trade. The area is already a bulk trade node with United Terminals (fuel) and Esso (gas and crude oil) operating north of the town, and Swiss company Puma Energy seeking to build a tank farm for imported fuel in the precinct.

Captain Cox said Victoria needed the two new ports if trade was to remain strong “otherwise we will become a backwater and have the added expense of our goods being sent by road from NSW or Adelaide”.

“Businesses will then move closer to these ports with dire consequences for Victoria’s economy,” he said.

The entrance to Port Phillip – The Heads – would not allow transit of bigger container ships, he said.

“One shipping company already wants to bring in vessels that carry 8000 containers and many shipbuilding yards have orders for 10,000 container ships.”

The Heads was not up to international standards for vessels of this size. “What will happen to Victoria’s economy if a vessel did hit the rocky sides [of the channel] and sink, blocking the channel?”

Captain Cox said 60 per cent of containers coming into the Port of Melbourne were taken by road to the “Dandenong and Braeside area”. There was not enough room to store containers west of Melbourne but Hastings had 3500 hectares zoned for port-related use. Melbourne had just 560 hectares.

He said the government should lease the Port of Melbourne for 10 years not 50.

“Port development at Hastings is integral to driving continued industry development and business innovation” in the southeast, the shire’s submission stated.

Both councils oppose any further deepening of The Heads and Port Phillip shipping channels.

Preserve Western Port Action Group told the committee an expanded Port of Hastings would have “serious adverse consequences for the everyday life of the region, its economy, its social fabric and its biodiversity”.

“Construction will involve substantial dredging in Western Port, which in turn will speed up the tides, which will redefine the coastline and compound the effects of climate change.”

There was a risk of damaging seagrass and marine animals and endangering the biodiversity and food chains of the region.