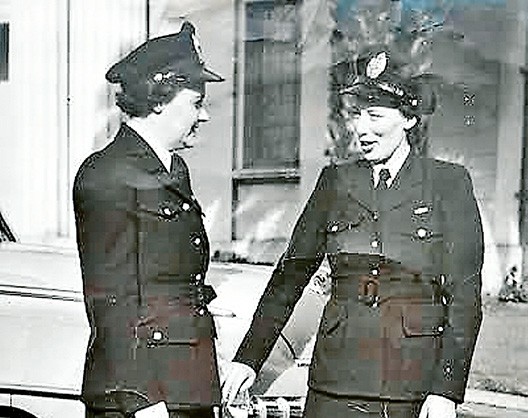 A VILLAGE Glen resident farewelled at Rosebud Funerals recently was the 13th Victorian police woman and one of the first five to be permitted to take part in police mobile patrols.

Mrs McCallum – nee Johnson – joined the force in 1946 at a time when policing was a man’s job and women were allocated administrative and driver duties, keeping them out of harm’s way. “She was proud of her time there and thought she was fortunate to be in the right place at the right time,” son Ross McCallum said last week.

“Times were tough when she saw an advertisement for drivers and thought, ‘I could do that’. She was accepted and became a member of the first group to wear uniforms and be permitted to drive around town looking for offenders.”

Ross and his brother Howard didn’t hear their mum talk often about her former policing career – she left that to their dad, former Chief Superintendent Hugh McCallum (deceased). The couple also had seven grandchildren.

“She was proud of her role, but it wasn’t a big deal for her. She didn’t say much about the early days.”

Southern Metro Region Inspector Karen Nyholm said Mrs McCallum registered as No. 9840, meaning she was the nine thousandth, eight hundredth and fortieth member to be sworn in.

But, she also held the separate number of P/W 13 – indicating she was the 13th police woman to join. This type of number is no longer allocated.

“For me, a current woman in Victoria Police, I am inspired by women such as Joyce who led the way back in the 1940s to gradually challenge the role and equality of women in policing,” Inspector Nyholm said.

“I am the benefactor of her trail-blazing career – now enjoying equal pay and equal opportunity.

“Having spoken to her friends and family at the funeral, I learnt that Joyce was a dignified, elegant and strong woman who was very proper, as well as a committed mother and nana.”

A 1946 newspaper article made much of the-then Joyce Johnson and her four colleagues in their “smart, dark blue uniforms, peaked caps and silver police badge”.

“It is felt the new uniforms, which follow the tradition of London’s police women, will lend weight to their authority for arrests,” the paper said.

It recorded their first arrest – in Swanson St: “The woman prisoner was locked up at the City Watchhouse on a drunk-and-disorderly charge.”

Inspector Nyholm said after five years’ service Mrs McCallum was obligated to resign due to her impending marriage, which was required by law at that time.

She then supported her husband as his police career took them all over Victoria – often to run stations with a residence at the rear – and finally to Burwood, where they retired.

When her husband died Mrs McCallum made the move to Village Glen for the last three months of her life.

“She loved it there,” Ross said. “She especially got a kick out of the day trips with other Village Glen residents, especially one visit to the Police Academy a little while ago.

“Mum happened to tell the guide that she had once been a police woman and they looked at some old photographs on the wall and there she was.

“The surprised guide was in awe, telling the other visitors they were honoured to have a celebrity in their midst. That tickled mum.”