Restoration could see The Pride sail into history 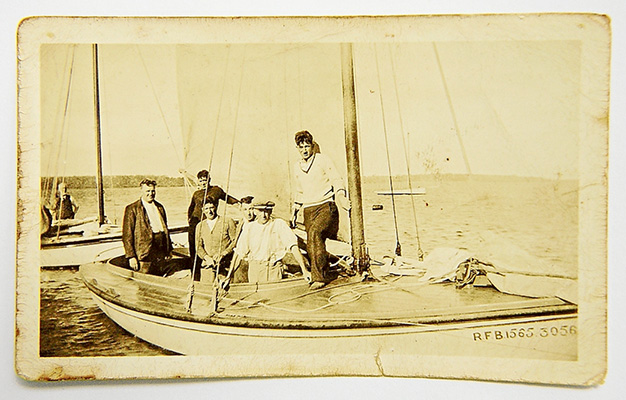 A PIECE of Hastings history left town when The Pride, a six metre couta boat, was placed on the back of a truck and taken to Sorrento.

However, owner Tim Mirabella hopes the boat’s future will include many more years on the water.

Built in 1932, The Pride was indeed the pride and joy of Mr Mirabella’s grandfather, who was also named Tim.

One of six brothers, to Mr Mirabella’s ownership of such a boat “established him as his own fishing entity”, his grandson says.

But The Pride was also more than just another fishing boat, changes incorporated in its design by Ken Lacco was quickly noted by the fishing fraternity.

Inspired by whale boats, ships’ tenders and lifeboats, the gaff-rigged couta boats were designed for fishing in waters right around the Victorian coast and the Lacco family was, and still is, seen as being at the forefront in both their design and production.

“The Pride became a benchmark, so I understand,” Tim Mirabella says. “It was beamy but had sleek lines. It had a graceful entry into the water.

“It had increased load capacity and really did sail well.”

The Pride sailed so well that a year after being launched it won the annual Boxing Day race from Hastings jetty to the shipping channel beacon.

“It’s a piece of Victorian fishing history and, when built, revolutionised the design of couta boats,” Mr Mirabella says.

“Everyone tried to copy it and, of course, back then they weren’t called couta boats; they were just boats, or fishing boats.”

These days couta boats are now mainly used recreationally, although those that race them are as intense as any fisherman leaving shore to make a living.

Tim Mirabella, who now lives at Mt Eliza and mainly fishes from Flinders Island, comes from a long line of fishermen dating back to his great grandfather Sebastiano, who jumped ship in Melbourne in 1880.

He had sailed here in the Europa, which had come for the opening of the Melbourne International Exhibition. In 1897 the Europa ran aground on a reef near Jurien Bay, about four kilometres off the mid-Western Australian coast.

Hailing from Sicily, Sebastiano Mirabella settled in Hastings and later married Matilda Kearns, whose Irish parents had moved there from Queenscliff in the 1860s. Consequently, the couple’s six children received either an Italian or Irish name.

The father of the Tim Mirabella quoted in this article is also named Tim, as is his father.

The Pride arrived in Hastings from Rosebud, where it was built and launched, under sail as its petrol engine failed to start. It was later fitted with a more appropriate and efficient diesel motor.

The boat’s staple catch was shark and snapper in Western Port and barracouta outside of the bay and near Flinders when operating seasonally out of San Remo.

Tim Mirabella says that during World War II fuel shortages saw The pride being sailed to and from the fishing grounds, with the motor only used when actually trawling the lines for fish.

His father’s brother Dennis – who later became a successful cray fisherman out of King Island, Wilsons Promontory and Tasmania – took over the boat from the elder Tim Mirabella.

“My grandfather still used her just for hooking [hand lines] whiting and snapper until about mid-1997. I then used it until about 2000, although she was registered as a fishing boat until 2007,” Tim Mirabella the younger says.

Mr Mirabella’s own days of commercial fishing Western Port ended in November 2007 after the newly-elected Bracks Labor government made good on its promise to end commercial netting in the bay. He could have continued long-lining but says it would have been uneconomical as it had a limited season.

In the lead-up to the election Tim Mirabella joined the campaign against the proposed ban by hauling an anti-Labor sign behind his car.

“It’s time for her to be brought back to life for the next 80-odd years,” Tim Mirabella says of his hopes for the boat to find a new owner.

“With the right work, she’ll be good enough to sail for decades to come.”