Owners banking on run for the money 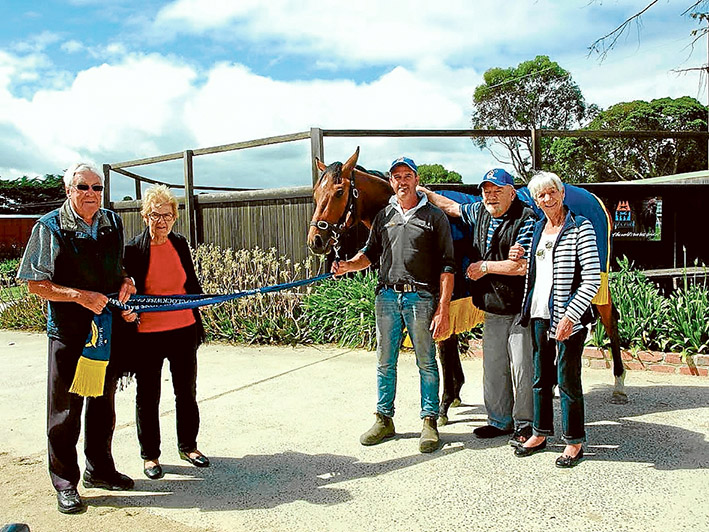 MORNINGTON racehorse Claro El Banco is living up to his name for nine owners whose relatively small outlay in buying him could result in a big payday in January.

Spanish for “Clear the Bank”, the name sums up the fortunes of the two year old which is part-owned by Roy and Liz Farrell, of Dromana, track ambulance driver Peter Seaman, of Somerville, Bobby Nissen, of Mornington, and six others whose involvement has added colour to the gelding’s rags to riches story.

More than just a race, the win qualified him for a start in the $2 million Magic Millions 2YO Classic over 1200 metres in January, which could set the owners up for life.

The Ballarat win was a godsend for the owners who didn’t give up hope after Claro El Banco – or Rocky to his owners – came last in his only other start: the Maribyrnong Trial Stakes for two year olds over 1000 metres at Flemington in October.

“He performed well below our expectations due to the way the race was run and we disregarded that as we knew we were good moving forwards,” Petch’s partner Lynne Rees said last week.

The performance was doubly disappointing for Peter Seaman, who watched the race from behind the wheel of his ambulance as he followed the field around the track.

The Ballarat win was a different story, but, in racing, there are many strange tales, as Ms Rees explains: “Roy and Liz Farrell [who previously ran a Mornington book store] couldn’t attend the race meeting as they had no substitute player for their bowls team and wouldn’t let the team down. They have been loyal supporters and clients of the (Petch) stable for three years.

“Ambulance driver Peter Seaman and partner Nicole Joyce bought their share in the horse in July after attending a stable function and seeing him. It is their first experience at ownership. What sealed their decision was that Peter’s father-in-law, Bob Cooper, was really sick and they thought it would give him something to be involved in as he had been a clerk-of-the-course in Victoria for many years and loves the racing industry.

“He lives at Ballarat but was too unwell to make it to the track on Saturday, so Peter and Nicole were able to take the trophy there and enjoy the celebrations with him.”

“It is their first racehorse, too,” she said. “They were unable to attend [Ballarat] as Tyson was best man at a wedding. He said he wasn’t game to mention the races and was happy when the wedding photographer asked if he could put the races on the radio.

“That’s when Tyson told them that he part-owned a horse that was racing. As a result they all backed it at $15:1 and Tyson was the most popular person on the day – I only hope he didn’t outshine the bride.”

Racing identity Bobby Nissen has worked around the area and in floating (horse transport) for years, but this is his first horse. He has mobility issues and couldn’t attend the Ballart race as there was no disabled car park available.

Other owners include Melbourne businessman and manager Paul Fielding. He joined the stable last year on the recommendation of his brother, Glenn, who has been a loyal supporter and client for four years.

Ms Rees said even naming the horse had its moments. “Paul picked it but, on the day I submitted it for registration, he messaged me and asked if he could change it.

“I said yes, but then I got a message saying: ‘In racing it is bad luck to change things, so let’s run with it.’

“And he has certainly cleared the bank for them.”