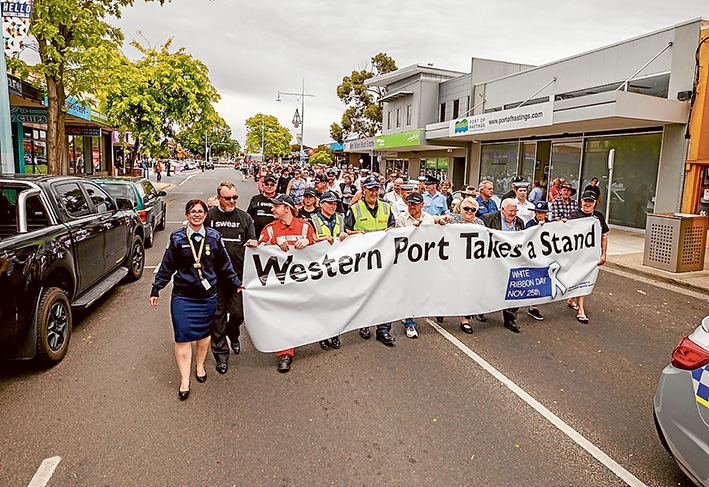 THE White Ribbon Day march in Hastings Wednesday showed the depth of support for the campaign to end violence against women.

More than 230 people made their way along High St to show their resolve to fight the scourge which takes the life of a woman in Australia every week.

Marchers assembled at the Hastings post office car park, Victoria St, before moving along High St to the library steps to hear speakers and enjoy a barbecue.

“We were most impressed by the large turn-out,” she said. “And we are hoping for a bigger and better march next year.”

Cr David Garnock was MC, and speakers were Noel McNamara, whose daughter was killed by an abusive boyfriend in 1992, and Mornington Peninsula Local Area Commander Dean Clinton, who is at the forefront of community issues.

Cr Garnock earlier said the shire was committed to preventing family violence. “Council adopted its Prevention of Family Violence Implementation Plan in 2015 to promote the prevention of family violence within our communities,” he said.

This follows data showing that, on average, every week one Australian woman is killed by a current and/or former partner. One-in-three women – about 3.9 million – will have experienced some sort of violence from the age of 15 in Australia. For indigenous women, the rates of violence are 35 times greater.

The shire is committed to enabling and promoting the peninsula as a safe place, acting to eliminate violence in all its forms, ensuring relationships between all members of the community are respectful and promoting the rights of men, women and children to live free from violence, he said.

“It is important for us as a council – and as a community – that men, women and children have the opportunity to participate equally in all spheres of public and private life without fear or discrimination.

“We will continue to work towards increasing community awareness of family violence as a key social and health issue.”