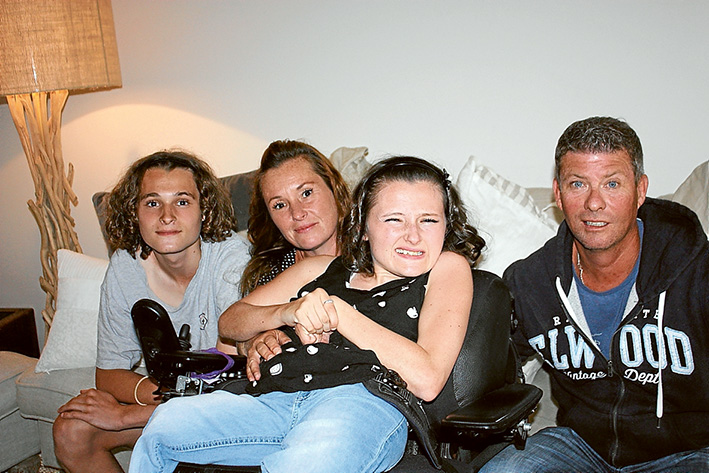 Appealing: Ethan, Fiona and Maygan Garland with Glenn Browne, who is about to take 1000 steps to bolster an appeal to raise money for the family to have wheelchair-friendly vehicle.
Share
Facebook Twitter LinkedIn Pinterest Email

MAYGAN Garland is 19. She has just completed year 12 and loves fashion and writing.

However, unlike many others her age Maygan has always faced challenges.

“It was the happiest day of my life when I gave birth to a healthy baby girl. She grew and did all the things you would expect and people would stop me in the street to tell me what a beautiful baby she was,” Maygan’s mother Fiona Garland says.

“One night she got sick and my baby girl’s whole life changed. By morning, Maygan was in an induced coma fighting for her life.

“She was six months old and had contracted meningococcal septicaemia. It was the third worst case they had seen and they didn’t think Maygan would survive.”

Maygan did survive, but lost her right leg and had a bleed to the brain, leaving her with a condition called Dystonia.

“I know that one day I will lose her but, right now, Maygs is the happiest, smartest and most lovely person I have met and I have had the most precious gift given to me,” Ms Garland says.

A full time disability support worker, Ms Garland cares for Maygan and her younger brother Ethan, 16, at their Mornington home but is struggling to get around since their car broke down and cannot be fixed.

When Glenn Browne heard the story, he decided something needed to be done. On Sunday December 13 he plans to take 1000 steps to launch a fundraising effort to buy the Garland’s a wheelchair compatible car.

“I have known Fiona for a couple of years and when she told me about her car I knew I just had to help,” Mr Browne said. “I started the fundraising campaign five weeks ago and am raising money for the first part, which is doing the 1000 steps walk in Ferntree Gully on Sunday at 10.30am. The response has been great. We have raised over $1000 but to get a car that is fitted with wheelchair provision is going to take a lot more than that.”

Not one to look for handouts, Ms Garland has been completely blown away by the generosity of Mr Browne and others who are donating to the cause. “I cannot believe that people would do this for us and cannot thank everyone enough,” she says. “It has been really tough without a car and we can’t afford to buy one ourselves.

“At the moment we wait for taxis but they have to be wheelchair taxis and often don’t even show up, which means Maygan is missing hospital appointments as well as fun things like shopping to look for a graduation dress.”

The family needs a people mover that can be converted for wheelchair access, which in itself costs $27,000.

“I really believe the community can get behind us to raise the money for them, and hope that a car yard might even donate a car to them. Then we can use the money to convert it,” Mr Browne said.

To make a donation go to www.gofundme.com/nk6wvqbw