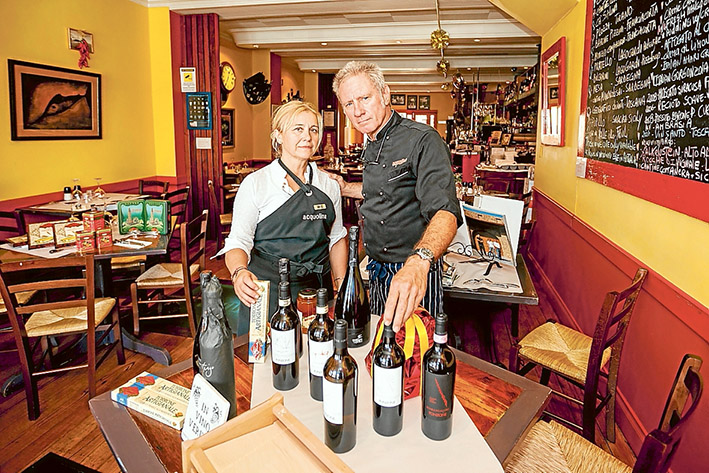 THE owner of Sorrento restaurant Acquolina Brett Johnson admits to being “shell-shocked” at the defection of 13 experienced kitchen staff to rival, The Sisters Kitchen Garden Cafe.

Their surprise departure last week has forced the temporary closure of his and partner Maria Grazia Baiguini’s fine dining restaurant at the busiest time of the year and caused a spat between the two popular eateries.

“We simply can’t find staff at this late stage so it was better to close temporarily and reopen on Boxing Day,” Mr Johnson said. “We will re-open and do something simple, such as serving fresh lasagne, ravioli, risotto and pasta plates.”

While on his regular visits to Italy Mr Johnson arranges for Italian staff to work at Acquolina and arranges accommodation.

He said the visitors were free to work elsewhere as long as it didn’t affect their roles at Acquolina.

However this year the system appears to have broken down and the staff have defected and found other places to stay through their new employer.

“The Italians often worked elsewhere out of hours and the arrangement had seemed to be working well,” Sorrento chamber of commerce vice-president Marc Clavin said. “Now that seems to have been undone.”

The spirit of cooperation among the town’s traders following the razing of The Baths restaurant late October has been shattered at the start of the six-week period in which they make two-thirds of their annual income.

Mr Clavin said the loss of The Baths had left Acquolina as one of the few fine dining restaurants in the town “and now it’s a tragedy that another one in the main street has been lost”.

“Brett and Maria are right in the middle of the strip and the potential knock-on effect to other businesses is of concern.”

In the short term, Mr Johnson says Acquolina’s trading hours will be 11am-9pm rather than only at night, and revert to its former style and times in February.

“It’s certainly been a stressful time and my Christmas cheer level did drop a notch, but we have begun to come out the other side,” Mr Johnson said.

“There’s no animosity; we are looking forward now, not back.”

Mr Johnson saying his restaurant usually did 35 per cent of its trade in December.

“We should be working together in such a small town rather than fighting each other,” he said.

Pippa Robinson, of The Sisters, denies “poaching” staff from her up-market rival, and says only five of the 13 made the move.

“We are only open for breakfast and lunch and they open for dinner, so I really don’t know what the issue is,” she said.

“I got texts from all their [Acquolina’s] staff asking me for jobs here.

“Brett [Johnson] came to see me and made a scene and said I had stolen his staff. I said, ‘No, they came over to me voluntarily.

“They said they had all been fired, so there was no poaching.”

In the wake of the staffing row, Ms Robinson said The Sisters was expecting to open for dinner from Boxing Day onwards.