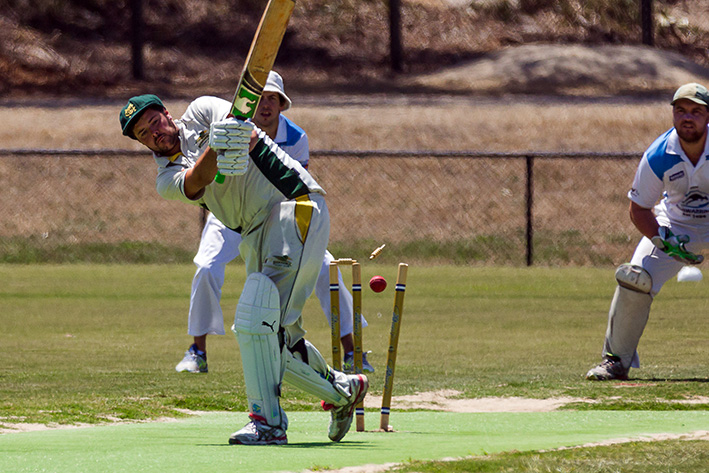 FLINDERS has joined Pearcedale in the MPCA District top four after serving-up a very solid performance in the one day clash on Saturday.

Playing on their home deck, the Sharks batted first after Dwayne Field won the toss and scored a competitive 8/144 in their 40 overs.

Andrew Power opened the innings with 40 runs while Mitch Stansborough contributed 33 to the total.

Chris Dew was the pick of the Pearcedale bowlers with 3/29 from 10 overs.

In reply, the Panthers lost wickets consistently and were eventually dismissed in the 35th over for 98.

Will Kennedy top scored with 21 before being run-out. Matt Burns made it 14 wickets for the season after picking-up 3/16 from 10 overs.

The Braves batted first and made a very hard to reach 8/199.

Travis Kellerman, who has played just two First IX games this season, top scored for the home side with 62, while Tom Wood scored 41 at the top of the innings.

Cam Williams was the best of the Boneo bowlers, with four wickets.

In reply, the visitors were bowled out in the 36th over for 102. Josh Gana top scored with 23.

Ryan Barnett claimed 4/26 from 10 overs for the Braves.

Red Hill and Main Ridge scored more than 400 runs between them on the small deck at Ditterich Reserve.

Rowe bowled five overs for a return of 4/32 and was the catalyst in the win after Main Ridge appeared to be in control at 6/180.

Seaford is one game outside the top four after picking up the win against Delacombe Park. The Parkers were bowled out in the 28th over. Shane Deal was explosive, netting 71 after the visitors were 7/78.

Heatherhill too is just a game outside the top bracket after beating Carrum. They made 8/163 with Kristian Miller top scoring with 34 and Christian Heath getting 29.

Ben Davies picked up 3/25 in his first senior match while Jake Theobold claimed 3/29.

Seaford Tigers picked up the 12 points after beating Mt Martha.

The Reds batted first and were restricted to 99 in 38.3 overs. Jake Smart top scored with 25.