Marine history all at sea 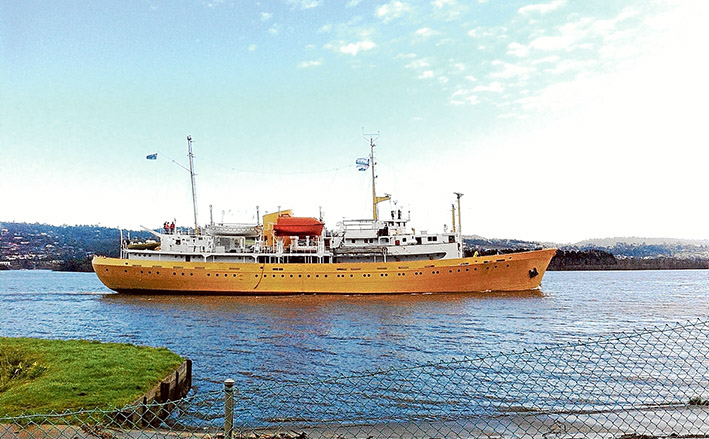 All tied up: The Wyuna, top, has been refitted and made seaworthy to be brought from Tasmania to Victoria but there is no berth available. The submarine Otama, below, is already in Western Port but unable to be brought ashore at Hastings because of a mixture of red tape, planning rules and lack of money. The two vessels are the planned centrepiece of the Victorian Maritime Centre.
Share
Facebook Twitter LinkedIn Pinterest Email

THE two vessels integral to the success of Victorian Maritime Centre being built at Hastings are in trouble.

The Otama, an Oberon class submarine, is anchored off Crib Point and needs new mooring cables by May if it is to survive winter storms. Cost of the cables is put at $50,000.

The other vessel owned by the Western Port Oberon Association, the Wyuna, was built in 1953 and donated to the association in 2013.

Although extensively refitted and undergoing sea trials she remains in Tasmania because there is no berth available in Melbourne.

Association president Max Bryant said the Wyuna is a classic 20th century design and spent 26 years with the Port Phillip Sea Pilots before being used as a training ship for the Australian Maritime College in Launceston until 2004.

Several other plans for the use of the Wyuna fell through until it was given to the association which wants to use it as a school camp.

In his end of year report Mr Bryant sees the latest instalment in the Wyuna’s history as a “sorry tale … laying at anchor unattended in Bell Bay where Tasports dumped her”.

Mr Bryant said the Wyuna was partly restored and then “ran beautifully at over 14 knots downriver to Beauty Point … [before] completing sea trails”.

“During this period the berth in Melbourne at Docklands disappeared due to proposed wharf renovations being brought forward by Melbourne City Council. We ended up stranded; thankfully Tasports came to our aid and allowed us to stay alongside at Inspection Head. The Tasports management at that time thankfully were aware of our financial situation and after initially issuing a berth notice of a fee of $442 a day agreed to waive the fee and we pay for power consumption only.

“The very day the harbourmaster retired the original notice was reinstated without any warning and back dated. We had budgeted for the cost of the power not the berthing fee. Tasports also had wharf renovations being carried out at the berth so we had a limited tenure at Inspection Head.”

Months were then spent unsuccessfully looking for a berth at Melbourne. The same result came from inquiries at “ports from Portland to Eden”.

Tasports was then under pressure to move the Wyuna or face penalties for holding up contracted port works.

It finally seemed a berth was available at the old Hydro wharf in bell Bay, only to see the opportunity disappear when the pilot decided it was unsuitable.

“We had inspected the wharf with the representative of the owners and deemed it suitable [but] apparently we were not qualified to make that determination,” Mr Bryant stated.

The pilots eventually called to say Wyuna would be sailing within hours and told Mr Bryant to organise a crew.

“How they expected me to muster a volunteer crew in such short notice I have no idea,” he said.

“When this was relayed to the pilots they said they would use a tug to move her and place the vessel on anchor in the bay. I made it quite clear we were not in a position to not only fund a tug but did not have the infrastructure set up to man a vessel on anchor, this was also relayed to the harbourmaster – still they went ahead.

“Wyuna was unceremoniously dragged away from the wharf by a tug and taken out in to the bay and dropped on anchor where she rests.”