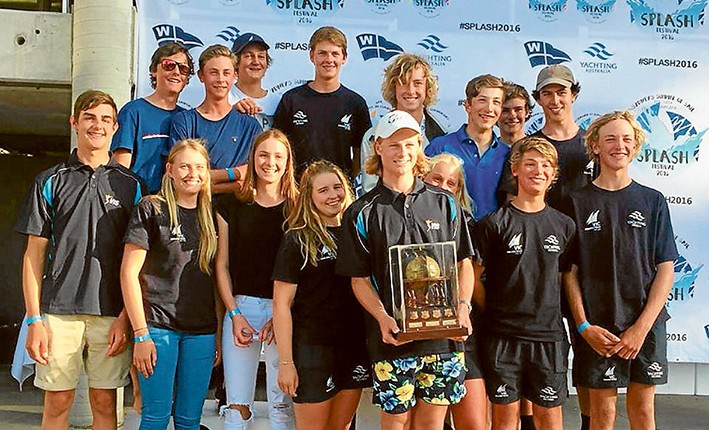 JUNIOR sailors from Mornington Yacht Club weathered the worst of the storms in NSW during the recent Laser, 420 and Optimist class championships.

The club had 15 Optimist sailors competing, eight 420 sailors and two Laser sailors, with around 30 parents and six siblings accompanying them and offering support. Coaches were Mel Hitchen-Haw, Johnny Rodgers and Bunny Warren. Matilda Richardson and Jazzy Evenden made it into Gold fleet at the Australian National Optimist Championships at the Georges River Sailing Club, Sandringham NSW. Lily Richardson bounced back from a tough qualifying series to place sixth in silver and John Faulkner sailed to a good ninth.

MYC Rear Commodore Chris Jackson said the junior sailors had a huge seven days of sailing in the Optimists class on Botany Bay.

“During the first few days the weather was atrocious with gusts over 25 knots and over 100mm of rain,” he said. “Visibility was so poor that a support boat had to turn on its powerful lights to show the finish line.

“The kids got much better at avoiding spectacular nose dives and capsizing on the run.

“Sailing at the end of Kingsford Smith runway was also interesting. On the last day three Optimists were laid flat as a 747 flew low overhead.

“Needless to say, the week was a big challenge for the young group. They have certainly learnt heaps, and return much more experienced.”

Fifteen Optimists sailed in the three fleets, with most in Open fleet. The qualifying series was sailed in heavy, wet conditions, but then the final series was in lighter conditions, meaning the lighter kids who had a tough few days came back stronger at the end, Mr Jackson said.

Mornington Yacht Club got on the podium in the Intermediate and Green fleets, with Millie Evenden winning green – and collecting the same trophy as Tyrone Gowans in 2009. New member Jeremy Gray won third in Intermediate.