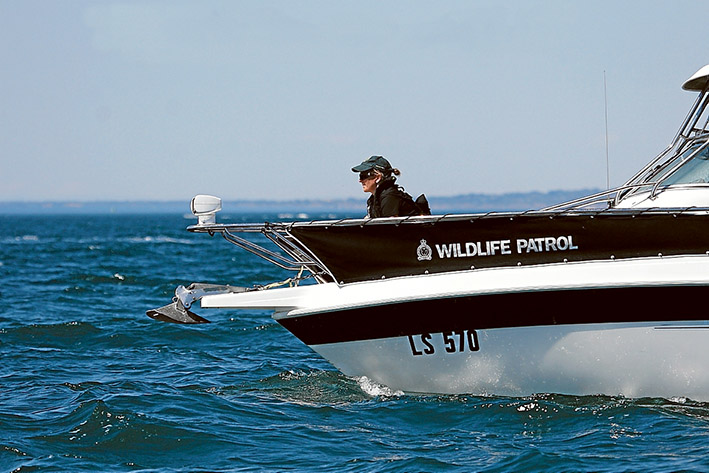 A CLOSE watch is being kept on power boats and jet skis to protect seals and other animals in Port Phillip.

An increase in patrols by the Department of Environment, Land, Water and Planning along the Frankston and Mornington Peninsula coastline follows rare visit to the region from an Antarctic crab-eater seal and the return of Australian fur seal Arcto to Dromana.

The crab-eater seal was only 11th of its kind spotted in Victoria since 1856 and the first since 1999, while the bull seal Arcto was back at Dromana for the third year running.

With peak boating season in full swing, the DELWP Port Phillip Region is using its own jet skis and patrol boat to protect the bay’s dolphins, seals and other marine life.

“We’re now ramping up our patrols all along the peninsula coastline where we expect hundreds of jet skiers and boaties to be present during the Australia Day holiday period,” DELWP compliance officer Abby Smith said.

Fines for driving too close to marine animals ranged from $228 (on the spot) or $3033 if taken to court.

Ms Smith said vessels should cut their speed to five knots or less if near a dolphin or whale “and drive away from the animal”.

“We’re partnering with other organisations like the Australian Marine Mammal Conservation Foundation to provide a visible presence and take action when necessary to ensure people are doing the right thing by the bay’s wildlife.

“Having so many recreational users on the water will disturb the behavioural patterns of dolphins and other precious species, so we ask people to behave responsibly and minimise any interactions with the bay’s wildlife.”

For more information on the regulations, visit www.delwp.vic.gov.au or call 136 186. To report sick, injured or distressed marine wildlife call 0447 158 676.