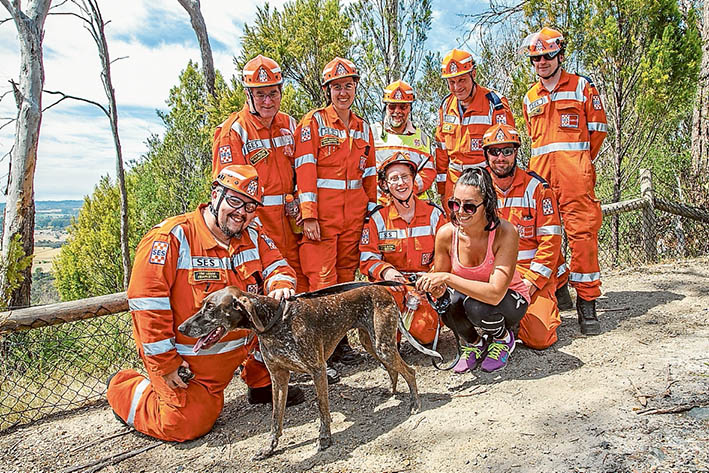 Steep learning curve: A woman is rescued by SES and CFA crews after falling down the quarry wall at Mt Eliza Regional Park, Moorooduc, above; the cliff face from which the woman was rescued, below. Pictures: Gary Sissons
Share
Facebook Twitter LinkedIn Pinterest Email A WOMAN stuck on a cliff at the former Moorooduc quarry, Mt Eliza Regional Park, Tuesday morning (19 January), may be lucky to escape a fine for breaching “No dogs allowed” signs.

The woman and her German short-haired pointer, Mailey, had to be winched to safety after slipping 15 metres down the quarry face about 10am Tuesday. They were on a ledge for about 90 minutes.

A friend alerted rescue crews who assembled up top and prepared to bring her back to the top. They included CFA crews from Mt Eliza, Dandenong and Frankston and Frankston SES.

A high-angle rescue team from Dandenong and CFA specialist rescue crews pulled the dog up first using a K9 harness, which goes over the head to prevent biting, and then the woman, aged in her mid-20s.

“Our crew arrived shortly after 10am to find a woman in her 20s trapped and inaccessible,” Brodie White of Mt Eliza CFA said.

“She appeared to have gone to the aid of her dog after it jumped a fence and became stuck on steep terrain.”

Mr White said a portable radio was sent down to the women so she could communicate with her rescuers.

The rescue was completed at 11.30am and the woman was given the all clear by paramedics.