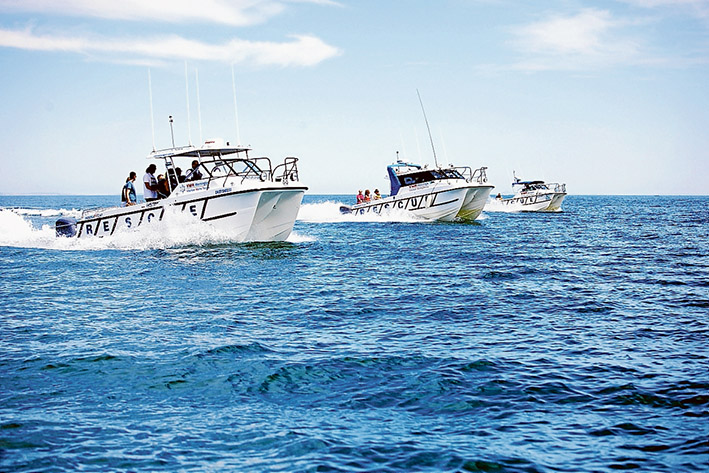 THE launching of the Volunteer Marine Rescue’s latest vessel, Darbyshire III, at Mornington on Sunday last week, is a boost to water safety and a tragic reminder of how the service came about.

The Noosa Cat 3000, a nine-metre, state-of-the-art vessel, was officially launched by Sue Darbyshire, the widow of the man who gave the boat its name.

Paul Darbyshire drowned within sight of the shore in 1980, prompting a public push for better safety measures for bay users.

So moved and upset were Mornington police – two were among those watching the drama from the clifftop – that they organised a public meeting at Mornington Racecourse in June of that year with 120 residents attending.

“We can never forget why our rescue service was formed, and do everything possible to ensure nobody else loses their life in the bays,” VMR president Tim Warner said.

Darbyshire III was built in Queensland to the strictest of survey standards and VMR’s requirements. This means it wasn’t cheap: the cost to buy and equip it was $363,000 – made possible with 80 per cent coming from the state government’s Boating Safety and Facilities Program.

Under the direction of the Victorian Water Police, VMR Mornington has carried out thousands of rescues.

Over the past four years, VMR Mornington and Hastings carried out 14 per cent of the state’s marine rescues.

“That’s 700 times our pagers have been activated. We do not have the data to substantiate the previous 32 years, but if we use the same formula, we have assisted more than 7000 boaters in distress in our 36-year history,” Mr Warner said.

“Typically, a rescue took us an average of over an hour to locate a vessel. Now, with most vessels having a GPS unit, we are generally alongside within 10-15 minutes of launching.”

In 2006 through a series of events, VMR took over Westernport Marine Rescue, and now has another modern vessel, the Alwyn Tamo, and a crew in Hastings to service Western Port Bay and Bass Strait,” Mr Warner said

“They are often called on to conduct searches along with water police out into Bass Strait in sometimes extremes of weather.”

VMR Mornington and Hastings promote safe boating and the wearing of life-jackets.

To join or donate to VMR visit vmrmornington.com.au