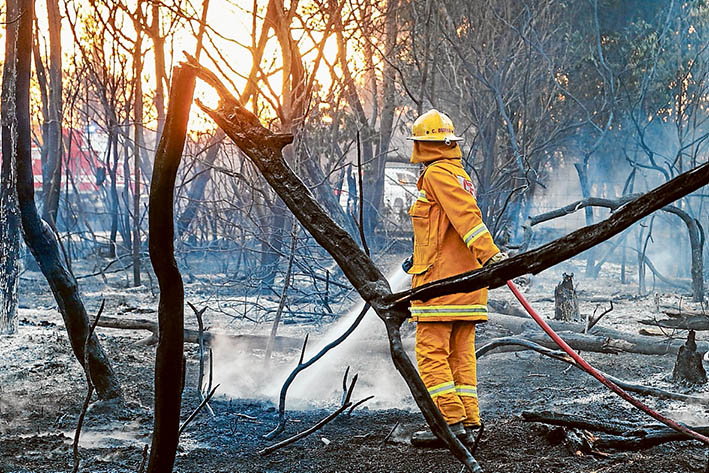 DETECTIVES are searching for a firebug after Monday afternoon’s Crib Point fire storm and have spoken to two men, although no charges have been laid.

The alarm for the first fire was sounded about 1.30pm – nearly the same time and place of a fire one week earlier.

Embers from that fire on The Esplanade have been blamed for starting the more devastating fire which destroyed one house and six outbuildings.

“This is an insidious crime that has an incredible impact on a community –putting fear and terror into people. We will do everything we can to identify and charge the person or people responsible.”

Inspector Nyholm urged people to “come forward with any suspicious activity they have witnessed, or any concerning behaviour they are aware of”.

Detective Sergeant John Coburn, of Somerville police complex, said police were  “chipping away” at tracking down those responsible for the three fires at Crib Point.

“We believe the first one [Monday last week] was deliberate and we suspect that fire caused the big one,”

That second blaze, as well destroying the house and outbuildings, burnt through 83 hectares of bush and grassland on a 200 metre fire front, bringing fear and anxiety to residents.

An emergency warning issued at 4pm advising residents of Crib Point, HMAS Cerberus and Stony Point that it was “Too late to leave” and to activate fire plans came just minutes after a “No immediate threat” which had already seen many residents evacuate the town.

CFA District 8 operations officer Arthur Haynes, who issued the emergency alert to residents to stay home rather than flee, said staying was the safer option.

“When we say stay at home that means there is no time left: trying to get out would scare people and possibly create panic,” he said on Friday. “We made the right call.”

Thirty fire trucks and 130 firefighters brought the blaze under control by 11.30pm. An Ericson air crane and two helicopters fought the fire.

Mr Haynes said he was “still dumbfounded” by the speed of the fire as it made its way south – and then did an about-face with the south-westerly wind change.

“It was a classic example of how a wind change can alter circumstances,” he said.

“We had a lot of resources at the southern end to stop the fire and then the wind changed and it went back and sideways to the north east. It was a typical peninsula fire: small and fast-moving.”

Hastings CFA captain Jim Atkinson said good training allowed his crews to work well together fighting the blaze. “We had 40 firefighters from here and three vehicles who worked all night and the following day.”

Detective Coburn said that, in a possibly linked incident the next day, Tuesday, two boys aged about 14 were disturbed setting fire to old tyres and bracken on a vacant block in Governors Rd, Crib Point.

A neighbour spotted them using a gas torch to start a fire at 5.30pm. CFA crews already in the area were able to quickly put out the small fire.

The teenagers rode off through scrub in the direction of Crib Point football oval on small motor bikes. One of the boys reportedly has light brown, shoulder-length dreadlocks.

“Our police role here is to assist the CFA with road management and any evacuations required. We implore the community to assess things early, take note of the warnings and act,” Inspector Nyholm told the meeting.

A relief centre is open at Somerville Recreation Centre on Edward St.

The mayor Cr Graham Pittock said the community had worked together well in the emergency to mitigate losses.

“What I saw was an improvement on last year,” he said, in reference to fires on 3 January 2015 which destroyed large areas of Warringine Reserve, Hastings.

“All the fire services said the public had done well – but arson makes it a difficult situation for us all,” Cr Pittock said.

Cr David Garnock said the latest fire was “a horrible incident, but it brought out the best in people”.

Mornington Peninsula Shire has organised a meeting this Thursday for community leaders to discuss how they “can work together in the recovery process”.

The CFA advises residents to monitor conditions and remain aware of the latest fire information, with a Severe Fire Danger Rating for the Central District.

Anyone with information about the fires can call Detective Sergeant Coburn on 5978 1431.