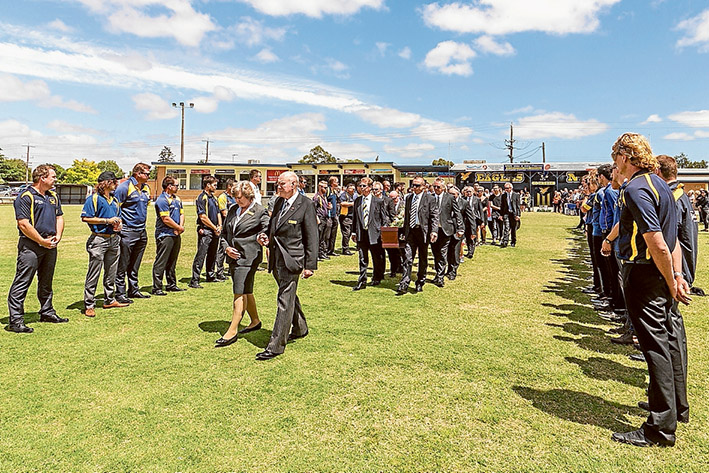 A GUARD of honour was the focus of hundreds of mourners for businessman Murray Gomm at Somerville Football Oval, Monday.

The cortege did a lap of the oval – with the 40-strong guard popping cans of beer to toast the man whose family built the Somerville hotel and ran it for many years.

Ted Bull, of Ted Bull Funerals, said Mr Gomm oversaw the hotel’s smorgasbord which was “the best meal in town with queues out the door”.

Mr Gomm, 60, had been in good health until being diagnosed with colorectal cancer in December 2014.

Wife of 30 years, Leanne, said her husband was “born and bred” in Hastings and Somerville and had the area’s history flowing through his veins: he was reportedly the great-grandson of the first white woman born in Somerville.

“We met at the hotel all those years ago and our families were friends,” she said. “He was a lovely husband.”

Mr Gomm – as did his pioneer family – lived his whole life in the district, following in his father’s footsteps in running the hotel, and later breeding racehorses at Orkney Farm, corner Eramosa and Coolart roads.

He was president of the Somerville Football Club and a committee member of the Somerville Cricket Club, and regarded as fine player, official and all-round tireless worker for the club since 1967. An extract from genealogy website Familytreecircles said Mr Gomm was “merely following a family tradition” in supporting the club. In April 2010 it quipped: “The Gomm family has had a constant presence at the Somerville Football Club since the club was born in the 1890s, with Murray’s father, grandfather and countless other family members heavily influential in the club’s development.

Mr Gomm leaves a daughter by a previous marriage, Belinda, 39, and a son, Riley, 18.