Prout To Be A Rotarian 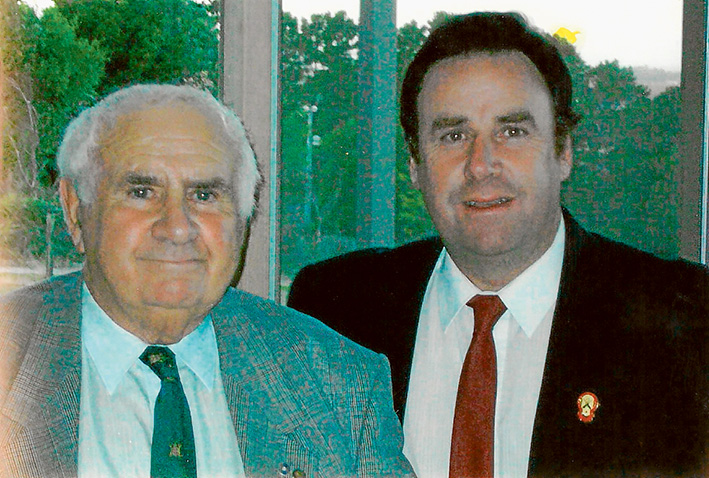 DON Prout moved to Tyabb when he completed his electrical apprenticeship at the age of 21. For the past 66 years he has conducted his business as an electrician in the district, although these days he is “more-or-less” retired. Over the decades he has been involved in a variety of community activities with Rotary being a special interest. This is Don’s story.

Don’s knowledge of his grandfather, Samuel Prout, is limited other than he spent some time in South Africa where he managed a gold mine. He was a keen musician as evidenced by the photograph of the Johannesburg Brass Band which was taken around 1900.

Samuel Prout had five children, one of whom was Stan who started his working life on a dairy farm at Woolamai. While there he met Ella O’Meara who also grew up on a dairy farm. They were married at the Presbyterian Church in Coburg where they built a house.

Stan worked initially as a driver for City Motor Service which had a government contract; his passengers ranged from the Prime Minister to Dame Nellie Melba, and, on one occasion in 1928, he drove a young Elizabeth Greene to her wedding to Keith Murdoch. Stan was later in charge of the service department before leaving to purchase a mixed business in East Melbourne.

The business venture was quite successful, enabling Stan to achieve his goal of returning to the country. Accordingly, in the late 1940’s, he purchased an orchard of 30 acres on the Frankston-Flinders Road (then called Hastings Road) in Tyabb. Subsequently he and Ella retired to a home in Jones Road, Somerville where they lived for the rest of their lives.

Don was an only child and was born in Brunswick on 29 August, 1928. He attended Moreland Primary and Secondary Schools and then attempted to join the navy but was advised to do an apprenticeship first. About this time his parents relocated to East Melbourne which meant that Don was a student at Collingwood Technical School. After two years of a carpentry and joinery apprenticeship, Don transferred to an electrical apprenticeship which he completed successfully. Collingwood Tech. in those days was something of a nursery for potential sportsmen: Ron Richards and Len Fitzgerald (both of Collingwood) and Harold Shillinglaw (Fitzroy) were to become League footballers while Neil Harvey – the last remaining member of Bradman’s 1948 Invincibles – was a more than handy cricketer.

Don was of course working during his apprenticeship years and, after his parents moved to Tyabb, he boarded at the YMCA and other places until he completed the apprenticeship.

Although his mother had sent him off for piano lessons for some years he was far more interested in playing the drums. He played the kettle drum in the school band and in the Salvation Army band while living in Moreland. During his teenage years he played regularly with several bands. This love of music has been a constant in Don’s life and he often plays the keyboard at home where the local Probus Club has a musical afternoon every second month.

Don played football for about 20 years, starting with the school team and then Black Rock before he moved to Tyabb.

Scouting was an early interest. Don joined the Moreland Cubs before moving on to Scouts. Later, when living in East Melbourne, he joined the Sea Scouts at Ivanhoe and would ride his pushbike across to attend meetings. In those years, while living in town, the bike was Don’s only means of transport to and from work.

The Move to Tyabb

Don was 21 when he completed his apprenticeship and decided to join the rest of the family in Tyabb. His initial intention was to join the navy but his father mentioned that about 300 properties in the area were about to have electricity connected and advised him that this would be an opportune time to set up his own business. And so the firm of D. Prout & Co. Pty.Ltd., electrical contractors,  was established: it still trades under that name with son Andrew in charge.

Over the years 33 apprentices have learned the trade from Don and Andrew and the business can proudly say that it has had some customers for over 40 years. Don and his wife, Shirley, continue to make a contribution by helping with the paperwork.

As soon as he moved to Tyabb Don resumed playing football, generally at full-forward, with Tyabb and then, when they went into recess, with Somerville. Don also played cricket with Tyabb until he was 43. As well as playing cricket for Tyabb on a Saturday, Don also played in a social competition on a Sunday based around Mornington. He was a member of the Mornington Peninsula Cricket Association and was involved in the building of their clubrooms at the Hooper Oval in Graydens Road. Locally he was on the committee and held the position of Vice-President of both the football and cricket clubs. He is a life member of both.

When Don was eight he spent his school holidays visiting relatives in Dunolly. Nearby lived the family of the local shoe repairer, Jim Edwards, which included a two year old daughter named Shirley. When Shirley was five the family moved to Frankston where her father continued to work as a cobbler, firstly from a shop in Playne Street and later on the Nepean Highway. Shirley attended Frankston and Seaford Primary Schools. In her last year of schooling she obtained a part-time job at the newsagency opposite the station in Frankston , and eventually went to work there full-time.

At the age of sixteen Shirley attended a dance at the Frankston RSL and happened to encounter a 22 year old from Tyabb who recalled their “meeting” at Dunolly some 14 years earlier. Although Shirley has suggested that for Don it must have been “love at first sight”, Don is quick to refute this idea!

On Australia Day, 1957 Don and Shirley were married at the Frankston Methodist Church; the day was chosen by Shirley so that Don would have no excuse if he forgot their anniversary!

They have two children: Susan, born in 1958, and Andrew, born in 1963. Although Susan now lives in Queensland from where she runs a safety equipment business, her two children, Brennan and Rebecca Gillies, are residents of the Peninsula. The former is a horticulturist and the latter is a charge nurse at Rosebud Hospital.

Like his father Andrew played football and cricket and is a life member of both local clubs. He  also enjoys golf and fishing. In her younger days Susan was a keen netballer with Hastings.

As mentioned earlier, both Don and Shirley are member of the Hastings Combined Probus Club, and both have held the position of President in their 15 years of involvement.

Don’s main interest since his football/cricket days has been Rotary. He was an inaugural member when the Hastings Rotary Club was formed in 1969 and has held many positions in the club over the past 46 years. Don is a Past President and has just retired as Chairman of the Rotary Foundation District Committee. He has received a Citation Award and has been the recipient of a Paul Harris Fellowship. During this long period of service Shirley has been a Rotary-ann and was also awarded a Paul Harris Fellowship.

Don and Shirley were  on the Steering Committee for the establishment of Devil Bend Golf Club and both have been members at Long Island for 32 years. Shirley has won the championship at C grade level. Bowls has been another interest; they have  been members at Somerville where Don was a pennant member for eight years. The lure of fishing has not passed unnoticed: Don has his own boat and has fished Western Port Bay since 1949.

With the hard yards behind them, Don and Shirley caught the travel bug in the 1990’s: to New Zealand in 1991 and then an extensive tour of Europe in 1993. Assistance to the hospital in Suva was one of Rotary’s special projects and this led to a trip to Fiji for Don and Shirley in 1997.

Today, in their retirement, Don and Shirley Prout can enjoy the view from their home of 26 years in Peach Grove, Tyabb, and feel that they have made a long and significant contribution to their community.

By Peter McCullough and Vic Jeremiah