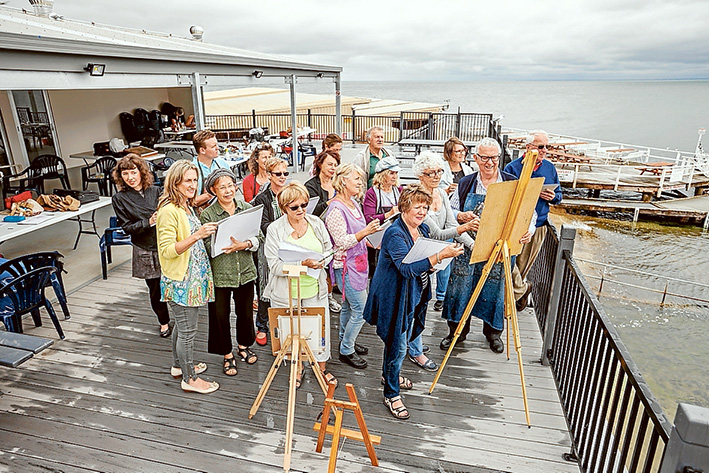 WHAT’S a “paint-out”? Why, it’s a group of people getting together to paint a given subject, of course.

This one: “At the water’s edge…” complements Mornington Peninsula Regional Gallery’s summer exhibition, On the Beach.

Enthusiastic artists in the paint-out focused on the intricate patterns of water movement at the water’s edge near the Canadian Bay Club, Mt Eliza, Thursday.

Coincidentally, the movie On the Beach was filmed at Mt Eliza in the early 1960s starring Gregory Peck, Ava Gardner and Fred Astaire.

“This group is not a formal art group or society as such, just people who heard we were putting it on and were especially keen to come along knowing landscape artist and instructor Colin Johnson was the instructor,” organiser Jane German said.

For the past five years the gallery has included a summer paint-out at an idyllic location – last year was Balcombe estuary, Mt Martha, and this year the Canadian Bay Club, which Ms German said had been “generous and welcoming”.

The club was closed for a large part of last year for redevelopment.

“When I told them what I was doing they were quite happy to offer the space and promote it to a group of people that may not have otherwise known about the club,” Ms German said.