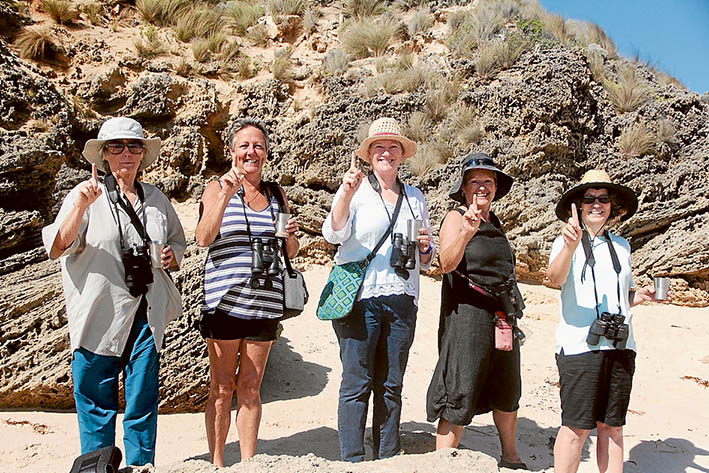 THE flight of a small bird on a quiet southern Mornington Peninsula surf beach saw people jumping for joy.

A young hooded plover that stretched its wings before gaining altitude from Fowlers beach is the first recorded successful take-off by a fledged hooded plover chick this season.

However, a note of caution underlies the applause and relief experienced by the small band of people dedicated to the hooded plover’s survival on the peninsula.

If the small birds are to remain in viable numbers, that chick needs to be joined in the air by at least another nine before the breeding season ends.

Sadly, if history is any guide, this number is unlikely to be reached.

Friends of the Hooded Plover (Mornington Peninsula) president Diane Lewis described the flight of the chick at Fowlers as being “a joy and relief”.

“It is such a wonderful feeling seeing these little chicks fly.”

Ms Lewis said that since last August volunteers had spent more than 1000 hours “investing time and energy” watching “these shy little birds” at various beaches, many facing the frequent fury of the Bass Strait surf.

Although this breeding season’s statistics are still coming in, the volunteers and Parks Victoria rangers have since September monitored 74 nesting attempts by 32 pairs of hooded plovers. Some of the pairs have nested up to five times without result, while others have given up after the first attempt.

Of the 35 chicks that have hatched just six were alive two weeks ago. And of those survivours three were more than four weeks old and the others just days old.

The situation for the plovers is dire. Calling where they lay their eggs a nest can be misleading. There is no structured nest, just a depression in the sand.

Although well camouflaged the eggs are easily spotted by marauding seagulls, ravens or magpies. They are also trampled by roaming dogs and favoured by foxes.

Once hatched, the chicks can run but not fly and again become prey to a variety of animals and birds. A kestrel was recorded by a time-lapse camera earlier this year attacking a fledgling.

The amount of rejoicing by the protectors of the hooded plover at the survival of just one chick is so high because the chances of a chick ever taking to the air are so slim.

“After 19 years of weekly monitoring hooded plovers on Fowlers and nearby beaches I still walk onto the beaches with my fingers crossed,” Val Ford of BirdLife Mornington Peninsula said.

“Will the nest still be there or will it have been washed away by a very high tide? Arriving on the beach and seeing both parents feeding on the rock shelf is always a worry – why isn’t one bird on the nest and the other on guard nearby?”

The vulnerability of the birds heightens Ms Ford’s fears.

“How many dogs will be either on or off lead and roaming the beach? Unfortunately, Fowlers and nearby beaches are dog central; many beach users ignore the no dogs and dogs on lead regulations.

“After the adults’ three failed nesting attempts the Fowlers beach hooded plover chick achieved lift off – the chick had survived 35 days and fledged. I can now uncross the fingers.”

Karen Wooton, a relatively newcomer to the Friends of the Hooded Plover group feels “incredibly fortunate” to have seen what is now known as “the Fowlers chick”.

“From vulnerable cotton ball on pretzel legs to bold, confident, independence. I’ve learned about – and I’ve seen – the challenges these beautiful little birds face just trying to do what most of us take for granted: live, flourish, raise a family and stay safe,” she writes in an account of her time with the group.

Ms Wooton said the only challenge facing hooded plovers that could be changed is “the human impact component”.

“If we could all just be a bit more respectful and thoughtful with what we do on those days at the beach we might be able to tip the balance in the hoodies favour.

“They have nowhere else to go. The beach is their home.

“An unleashed dog can trample a nest, crush an egg, traumatise or kill a chick. Protective parents may hide a chick from danger and, while that chick is protected, neither parents nor chick will forage and feed for the duration of the disturbance.

“Repeat this disturbance on multiple occasions and ‘failed’ will be entered on the hooded plover database. Another loss.”

Ms Wooton said hooded plovers would stand a greater chance of survival if dogs were taken to “dog friendly” beaches and if people would sit away from fenced off areas and walk close to the water’s edge.

Failure in nature was inevitable, but simple changes to human behaviour could bring success to the hooded plovers.