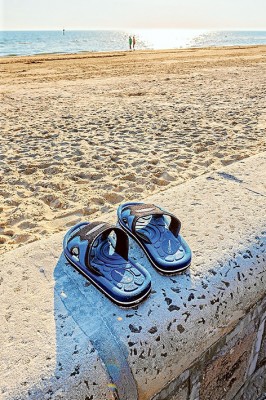 There have been 23 reported drowning deaths in Victoria this financial year, 13 of those were in coastal waters which is five more than the previous five year average of eight.

Since July, 78 per cent of rescues performed by lifesavers and lifeguards have been outside the patrol flags.

Life Saving Victoria used dye in a rip at Gunnamatta to show the public just how dangerous rips can be.

The exercise was also designed to educate beachgoers on how to identify a rip, as well as escape one.

“Rip currents are the top hazard on Australian beaches and are responsible for more than 20 drowning deaths on average per year,’’ Mr Shannon said.

“Rip currents often lead to drowning when swimmers attempt to fight the current trying to swim directly back to the shoreline, become exhausted and begin to panic.

“Some key signs to spot a rip include deeper darker water, fewer breaking waves, sandy coloured water extending beyond the surf zone and debris or seaweed.’’

He said if you are caught in a rip current, stay calm and conserve your energy.

“We suggest you raise an arm, call out to seek help and either float with the current or swim parallel to the beach. Reassess the situation – if what you’re doing isn’t working, try another option in your attempt to return to shore,’’ Mr Shannon said.