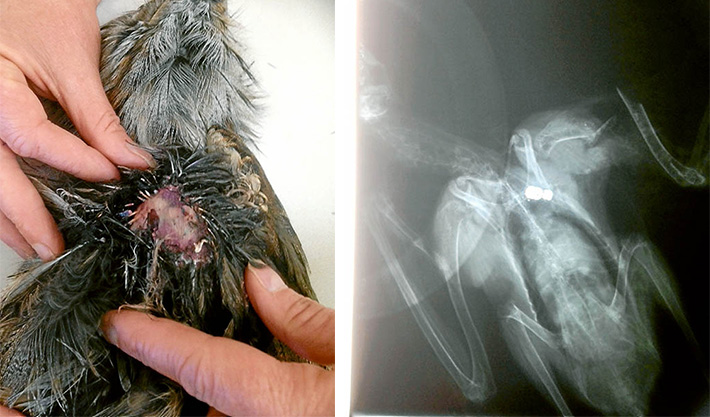 Down and out: An x-ray, top right, reveals the lead slug probably fired from an air rifle which mortally wounded a young tawny frogmouth at Rye; left, the open wound near the bird’s shoulder.
Share
Facebook Twitter LinkedIn Pinterest Email

THE senseless shooting of a tawny frogmouth has upset and angered Rye Beach Veterinary Hospital staff.

The wounded juvenile was found on Old Melbourne Rd near the Rye football oval with a badly fractured and infected shoulder could not be helped and had to be euthanised.

“I was very upset to receive it as it was a lovely little bird,” said veterinarian Stacey Lethlean, who has treated injured native animals for the past 30 years.

The nocturnal raptor, which eats moths and small animals, is a well camouflaged predator. It is protected by law and Ms Lethlean will report the shooting to police.

“It was probably just a senseless thrill-kill,” she said. “Its wing was fractured and it had obviously been in a lot of pain.

“We only found the slug through x-rays, which makes me wonder whether other injured native animals brought in, but not x-rayed, have also been shot.”

Anyone with information on the shooting is asked to call Leading Senior Constable Daniel Riddle at Rosebud police, on 5986 0444.