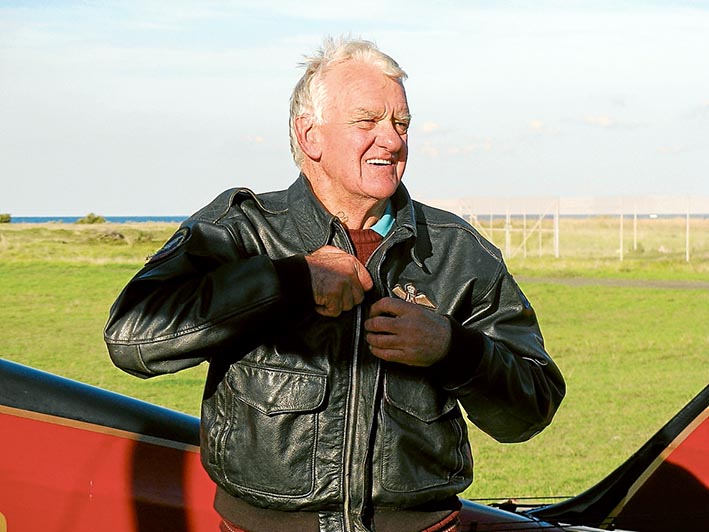 AFTER a twelve month battle with cancer Ben Mayne, a highly-respected citizen of Hastings, passed away on 18 February, 2016. Holy Trinity church was packed to overflowing for the funeral service on 25 February with the Rev. Alex. Packett officiating. The eulogy was given by Ben’s life-long friend and brother-in-law John Watson, supported by daughters Cindy, Vicki and Jackie, grand-daughter Emily, and brother, Bob. On completion of the service the cortege passed through a guard of honour formed by members of the CFA and the football club. This obituary is based on the eulogies given during the service.

MAURICE Benjamin Mayne, universally known as Ben, was born in Hastings on 11 July, 1939. He was the youngest son of Clarrie and Clara (both deceased) and had an older sister, Joan, and brothers, Bill (deceased) and Bob. Originally a navy man, Clarrie was the carrier in Hastings for many years.

After attending Hastings State School, Ben went to Frankston High School. He then began working for the PMG (a predecessor of Telstra and Australia Post) as a telephone exchange operator and at the same time he completed a linesman’s course.

Ben left the PMG to work at Mike Nugent’s service station in Hastings, and his business career really started when he and a fellow employee bought the service station. Over the next two years Ben’s connection with the lawn mower industry began when, in 1965, he started selling Victa mowers and Malvern Star bikes from the service station.

In the meantime Ben had married local girl Lorraine Temby on 6 June, 1964; this co-incided with the start of Ben’s business career and the couple worked in a partnership which extended through until their retirement in 2005.

Ben could hardly have imagined that the sideline he started at the service station would develop into one of the leading mower outlets in Victoria. After two years at the service station Ben started off the business known as Hastings Mower and Sports from a shop in High Street, selling and repairing mowers as well as selling sporting goods (including bait and tackle) and toys.

The business grew steadily and after a few years it outgrew the small shop and moved to larger premises at 55 High Street. However success did not come immediately, or easily, and it took many years of hard work by Ben and Lorraine for them to be rewarded for their efforts.

Fortunately Ben was endowed with a strong work ethic and in the early days, when the business was becoming established, he supplemented the family income by starting his working day at 2.30 a.m. when he commenced the local milk run in a horse-drawn cart; he would boast in later years of the accuracy he developed in throwing an empty milk bottle at any dog which made the mistake of having a go at him or his horse, “Ginge”! The milk round finished, Ben then drove a school bus before working in the shop, leaving to drive the bus again in the afternoon. He would then work in the shop until closing time but, as the business developed, he would often stay back doing mower repairs until late at night.

As well as assisting Ben in the business, Lorraine attended to the needs of their three daughters – Cindy, Vicki, and Jackie-all of whom spent plenty of time at the mower shop during their childhood years. Ben was also a very proud family man who set high standards for his girls.

With the growth of Hastings Mowers Ben and Lorraine were joined in the partnership by their brother-in-law, Alan Young, who as well as being a life-long friend, was a committed partner in running the business over a long period of time. After many years at 55 High Street, Hastings Mowers made the bold move to the much larger, purpose-built, premises on Frankston-Flinders Road. In 2005 Ben, Lorraine and Alan took a well-earned retirement and it has been with some pride that they have watched the business develop further under the partnership which includes Ben and Lorraine’s daughter, Cindy.

A list of Ben Mayne’s personal attributes would include not only hard work but also innovation, risk-taking, enthusiasm and loyalty. The last of these was obvious in the passion that he displayed for his home town: he worked tirelessly for the benefit of the Hastings community.

Although he did not play for the Hastings Football Club, Ben was the boundary umpire in his younger days, and went on to serve on the committee for many years. Older residents will recall the Country Music Festivals that Ben helped to organize at Hastings Park for several years to raise funds for the Club; each Festival attracted several thousand enthusiasts. Ben was made a Life Member of the Hastings Football Club for his extensive contribution.

He was also awarded Life Membership of the Hastings Cricket and Football Social Club in recognition of his contribution to the Club’s administration over a long period; his strong decision making and professional attitude was clearly evident in assisting the Club to become the success it is today.

The second organization to which Ben made a major contribution was as a volunteer with the Hastings Fire Brigade. He was an active member for 44 years from 1960, holding various officer positions for 32 of those years including nine years as Brigade Captain. During that time he was a brigade delegate to Western Port Group and held the position of Deputy Group Officer for four years.

In recognition of his service to the CFA Ben was awarded the National Medal in 1981, and then in 1992 he was rewarded with both Life Membership of both the Hastings Fire Brigade and the CFA. Life Membership of any organization is very special; to be recognized with four Life Memberships within the same community is outstanding.

When work and community responsibilities permitted, Ben was an enthusiastic and capable fisherman. He always had a boat and would get out on the water at every opportunity. At times his enthusiasm to get underway would create a problem. On one occasion he decided that he would take the boat to Shoreham: it was placed on the trailer and Ben set off with his fishing companion. On arrival at Shoreham they got out to unload the boat only to find an empty trailer; each had assumed that the other had tied the boat to the trailer. A hasty return trip was made to find the boat berthed comfortably on the roadside near Bittern. In medical terms it had suffered only “lacerations and bruises” and was considered by the two fishermen to be sound enough for the trip back to Shoreham.

As well as fishing, Ben was keen on rabbiting and his was possibly the only backyard in Hastings which maintained a colony of ferrets. Ben had a particular fondness for French Island and the family was frequently taken there to catch fish and/or rabbits. On occasions Ben would be required to make the return trip even when the weather had deteriorated; this meant that Lorraine and the girls would hold their collective breaths while Ben bailed furiously.

Perhaps a less dangerous interest was gardening. Ben was one of those people who seemed to be able to grow things better than most, and the family was never short of fresh vegetables.

Ben also had a love of old cars and in his retirement he became actively involved in the Mornington Peninsula Historical Vehicle Club where he held the position of Activities Officer and really enjoyed getting out in his 1954 TF MG or Lorraine’s 1963 Morris Minor 1000.

Finally, with so much time to spare following retirement, Ben dabbled in some industrial and residential development; the John Coleman estate near the football ground is part of this legacy.

Ben Mayne will be sadly missed by his family and friends. In concluding his eulogy John Watson expressed the view that Ben was a typical Australian, adding that the best way he could describe his old friend was that he was a “bloody good bloke.” This would also be the opinion of the Hastings community.

The Western Port News extends its sympathy to Lorraine, daughters Cindy, Vicki and Jackie and their partners, as well as grandchildren Mitchell, Emily, Ben and Jasmine.