Inspiration found in power of the surf 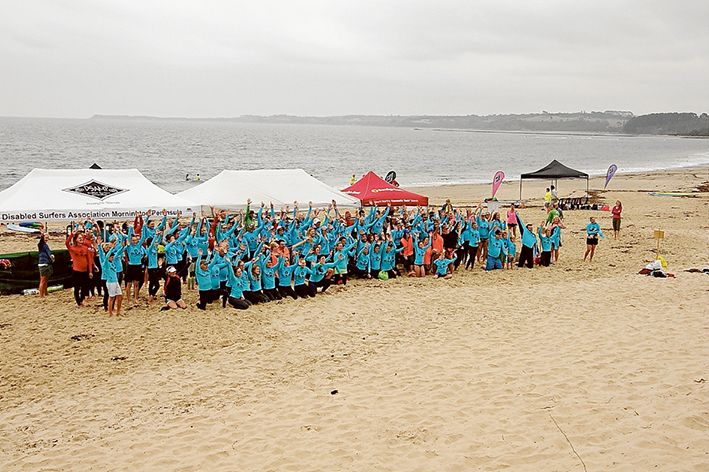 Day at the beach: The surfers try their best and, if they cop a soaking, clamber back on board (top) during the Saturday 5 March event held by the Mornington Peninsula branch of the Disabled Surfers” Association. As well as relying on the power of the sea to provide waves, the day at Point Leo succeeded due to the power supplied by hundreds of volunteers, cheerfully helping about 120 people with disabilities find out how it feels to ride a wave. Part of the small army of volunteers kept a steady stream of barbecued sausages flowing onto the beach while photographers snapped every surfer and their support teams.
Share
Facebook Twitter LinkedIn Pinterest Email

HARNESSING energy is the key to a successful day of surfing at Point Leo: people power and wave power.

Saturday 5 March was overcast all morning; there was a small swell and southerly winds. Not the best forecast for good surf or a day on the beach.

But from just after dawn cars and vans began arriving at Point Leo. Trestle tables were set up, barbecues fired up and tents erected.

A small fleet of wheelchairs was lined up just outside the lifesaving clubhouse.

The wheelchairs are the clue to the day’s event, a day of surfing for a group of people who are denied easy access to this one of life’s pleasures.

The Mornington Peninsula branch of the Disabled Surfers’ Association is holding its second, and final, event for the year.

With up to 300 volunteers needed to help about 140 disabled people have fun in the waves, it seems like a lot of effort.

But the level of enjoyment is reflected in the faces of everyone involved. In keeping with its motto, the Disabled Surfers’ Association is putting “smiles on dials”.

Gradually the car park fills. Hundreds of volunteers checking in to obtain wetsuits and coloured vests. Most wear blue, although there is red for team leaders and green for marshals.

The necessity for colour coding becomes clear once the surfing begins.

Before that happens, the “participants”, or surfers, also arrive.

They come in cars, mini buses bearing the names of organisations catering for the disabled and vans fitted with wheelchair ramps.

It is not necessary to describe their disabilities, although it’s fair to say they are many and varied, physical and mental.

When it’s their turn for surf, some of these surfers walk to the water’s edge, others arrive in the wide-wheeled beach wheelchairs, some are carried. They wear bright yellow vests.

Their faces all tell a story. There are smiles, looks of apprehension; some are unable to make facial expressions or even talk.

The physical side of their surfing is just as diverse. Some lie on the surfboards (on their backs and fronts), some stand or kneel. Others are carefully placed in specially-built bean bag “chairs” that gently mould into shape to support their bodies.

No matter what the disability, these people are out to enjoy themselves.

They come with carers and families (the ones in grey vests). Brothers and sisters take obvious delight in seeing their sibling lapping up the attention and enjoyment. Participating.

The actual surfing is carefully managed. Two lines of volunteers (blue vests) create a safe channel to the shore. Most often a team leader (red vest) will lie at the back of the board, steadying and steering it as it is pushed shoreward.

And the surfer, who has adopted whatever position is possible on the flat board, is suddenly transported into a realm that’s not possible in a swimming pool.

The raw energy of a wave created by wind thousands of miles away is being expended on a beach within Western Port.

That wave’s final act carries to shore whatever dreams and feelings the surfer may have.

They ride on a wave of natural energy, safe in the knowledge that helping hands are a few centimetres away should an upset occur.

And sometimes those upsets, wipeouts, happen. But it is happiness that shows on the faces of the surfers who, for one small moment slip into the white water, a watery realm that only a surfer knows, and loves.