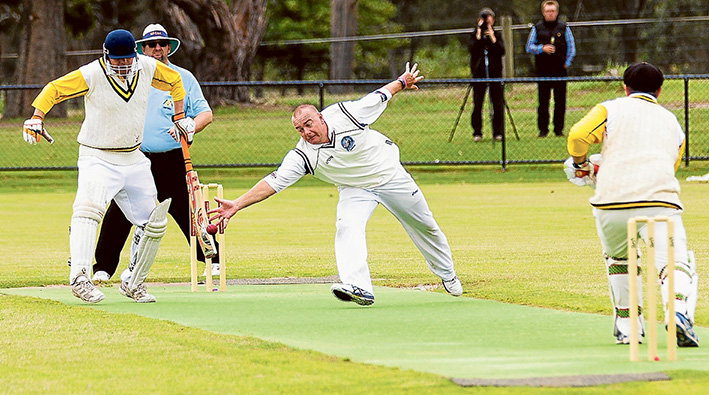 ROSEBUD will play in MPCA District ranks next season after winning the Sub District premiership against Frankston YCW on Saturday.

The Buds had to withstand a strong fightback from the Stonecats on the third and final day of the match to claim victory.

It was one of the best of all time in Rosebud star Jason Nagel who contributed most significantly to the win for Rosebud.

While rumours circulated on radio RPP about Jason Nagel’s cricketing future, he was going about winning a flag for his beloved Rosebud Cricket Club.

Nagel bowled an amazing 38 overs, had 15 maidens and finished with match winning figures of 6/60.

He bowled in tandem mostly with his son at the other end, Patrick bowling 27 overs, while Brian Doughty took 1/32 from his 14 overs and Billy Quigley snared 2/17 off seven overs.

Most attendees on Saturday were expecting to see four quick wickets and the premiership heading down the southern peninsula.

Frankston YCW went into the third day trying not to lose two grand finals in as many seasons.

The Stonecats resumed at 6/66 with the evergreen Matty Lane at the crease with Matt Black.

The couple completed the first task and that was to try and get their side to tea without loss. At tea, YCW was 6/100.

Lane and Black got the score to 116 before Nagel had Black trapped leg before for 13.

This brought skipper Andrew Kitson to the crease. It’s also when the game became very interesting.

Lane and Kitson took the score to 140 before Lane became Nagel’s fifth victim for 58.

It was more hope than anything else at that point for the Stonecats.

Rosebud took the new ball when YCW had reached 8/152.

Craig Burch added six runs before he was given leg before off the bowling of Brian Doughty and Kitson (43) had hits stumps rattled by Nagel to hand the Buds the premiership.