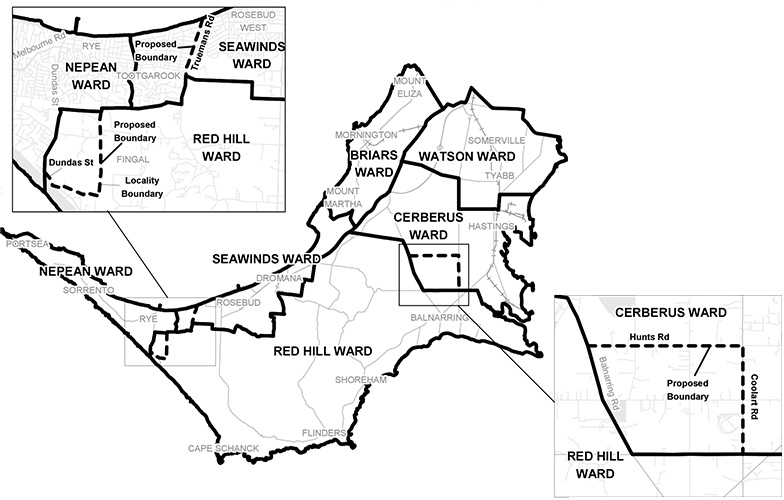 MORNINGTON Peninsula Shire’s Red Hill ward may encompass more than half the municipality, if proposals put forward by the Victorian Electoral Commission are adopted.

The VEC’s review of ward boundaries based on the number of voters, not size, is likely to mean that just one councillor will represent as much property as that of the other 10 councillors combined.

Red Hill ward is currently represented by Cr Tim Wood, elected in a by-election in August 2014 following the resignation of Frank Martin.

The VEC review of boundary changes – to ensure the number of voters represented by each councillor is within the 10 per cent average for the municipality – is being made before the council elections in October.

The final report is due to be released Wednesday 6 April.

The proposed boundary changes, although mostly minor, have again sparked criticism of a single councillor being able to adequately represent such a large ward.

The legality of Australia’s local government system is also being questioned by Samuel Crane, of Rosebud West, who wants the VEC to “closely investigate” his belief that the Local Government Act 1989 “did not receive a valid royal assent”.

The Balnarring Beach Community Association says voters in Red Hill ward lose some of their democratic rights because “one councillor in a very large ward cannot deal with all concerns adequately”.

Association president David Gill, a councillor and shire president of the former Shire of Mornington, said if the one councillor was ill other councillors could make decisions about the ward without being “fully aware of issues or the local knowledge”.

“We suggest that Red Hill ward should have two councillors and that 12 councillors be elected for the [shire] with chair having both a deliberative and casting vote as normal.”

A submission by the Friends of Cape Schanck also calls for Red Hill ward to be represented by more than  one councillor.

The group wants the VEC to investigate cutting the ward into two or three “and then explore adding more populated areas into those sections to meet the voter threshold for each councillor”.

Further south, the Nepean Ratepayers Association believes adding St Andrews Beach to Nepean ward would be a “better fit” than moving the boundaries to include “thinly populated” land centred on The Dunes golf course and “the whole of Tootgarook” and its 4479 voters.

In its submission signed by president Colin Watson, the NRA gives examples of proposed developments in Sorrento and casts doubt on the “problematic” expansion of Martha Cove, Safety Beach.

Eddie Matt, of Rye, has written to the VEC saying that as a farmer he wants to remain in Red Hill ward.

“Our interests as voters in the current Red Hill ward are best served by having a vote in the agricultural land use which is predominantly the Red Hill wards landscape,” Mr Matt states.

“This vote gives us a greater collective voice in the use and protection of the Green Wedge instead of being shifted into the Nepean ward which is predominantly zoned urban and used as residential/holiday homes where our agricultural voice would be lost.”

Andrew Raff, who lives in Fingal close to St Andrews Beach, says he has previously taken his concerns to the Nepean Ward councillor rather than the one representing Red Hill ward “for which, geographically and sociologically, we have had very little to do with”.

“I believe the Nepean ward boundary should enclose the area from Truemans Rd and all to the west to Point Nepean,” Mr Raff said.

“The area to the west of Truemans Rd has very little – except it is in the Mornington Peninsula Shire – to do with the Red Hill ward and basically it is completely associated with the southern peninsula region, thus it should be in the Nepean ward.”