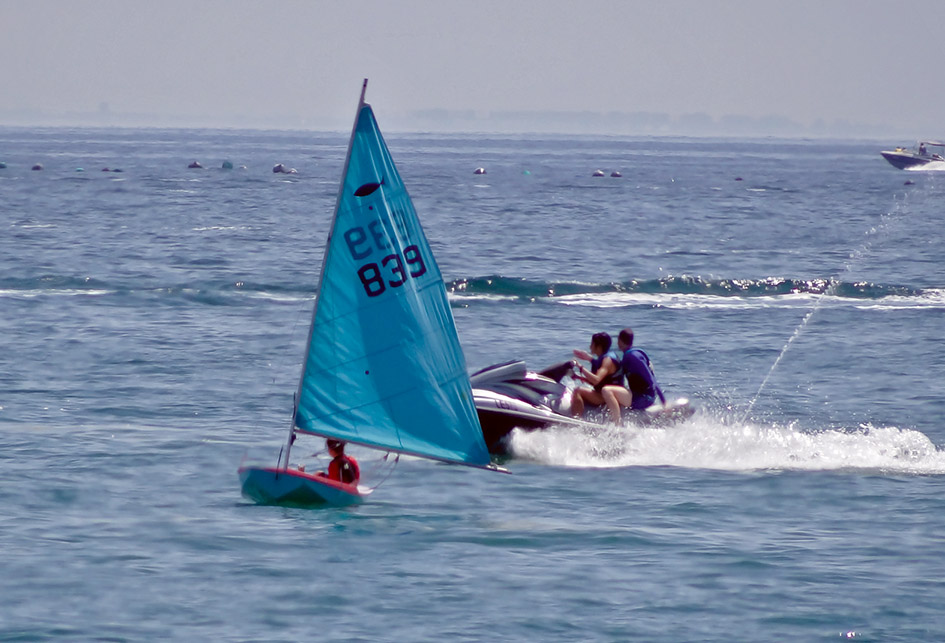 GETTING jet skis banned from Port Phillip could be a long, hard grind for its current sole public advocate, Cr Hugh Fraser. His first hurdle will be to persuade a majority of his council colleagues to support him.

But Cr Fraser, veteran barrister at law, can be persuasive and determined.

Mornington Peninsula Shire has no policy position on jet skis, says Cr Bev Colomb, currently president of the Association of Bayside Municipalities (ABM), through which Cr Fraser must advance his case for a ban.

His first task will be to convince his councillor colleagues – a number of whom could prove difficult to sway – to support his cause and to establish a shire policy. Only after he has achieved that can he begin advocating to the ABM, which may be even harder to persuade.

The 10-council group covers the entire bay coast, including Hobsons Bay. Its members must agree to lobby the state government to ban jet skis.

While some councils, including Mornington Peninsula Shire, have problems with “personal water craft” (PWCs), as jet skis and other powered water craft are formally known, not all are likely to favour a ban, for a variety of reasons, including recreational and political, and pressure from watercraft owners and the PWC industry.

Cr Fraser’s case is straightforward. “Jet skiers and swimmers don’t mix,” he says. “It’s no different to a motorbike on a footpath.”

The Victorian Jet Sports Boating Association put the same argument to a 2014 submission to a state government inquiry into the marine rescue services.

Mr Newman’s submission also argued for a tougher licence test for PWC operators. It was too easy for a 12-year-old to get one after “an easy multiple choice test”.

Cr Fraser echoes this easy going attitude many PWC owners have to their craft. “Once launched, jet skiers return to anchor close in off shore among swimmers,” he says. “This has to stop. Separate designated areas aren’t policed and don’t work.”

He is on shakier ground with his next line of argument – that jet skis are banned from Sydney Harbour and therefore Victoria could do the same on our bay. Sydney’s harbour buzzes with watercraft, from cruise liners and speedy catamaran ferries to spectacular skiffs, ocean-going yachts and humble tinnies.

Our bay has a fraction of Sydney’s boat numbers, spread over a less constricted space.

Again, Cr Fraser gets support from Mr Newman of the jet boats group.

“It only takes a small handful of reckless individuals to tarnish the reputation of a sport or recreation,” he wrote in his submission. “But none more so than [PWC] operation; this is compounded because when a watercraft is used in a reckless manner, it is usually witnessed by hundreds of people at a crowded beach.”

Tension has existed between jet skis and swimmers for years. In March 2012 a swimmer died after being hit by a jet ski with two men on board in a “swimming only” area in Port Melbourne. The jet ski did not stop, returning only after it was waved down by nearby fishermen.

The strategy quotes “government and agency feedback” stating that “jet skis are a growth industry that government policy and initiatives should support in terms of manufacturing, servicing and recreational infrastructure”.

“Parks Victoria estimated that the jet ski market has grown by approximately 19 per cent in recent times.”

Further down, the report reveals that the “government and agency” was in fact Parks Victoria but adds no further detail.

While much of this is imprecise consultant chaff – was “recent times” an acceptably precise term to use in a report to council? – the one important fact that emerges is the huge growth in the number of these craft.

The Association of Bayside Municipalities meets every second month. Cr Colomb says it has a crowded agenda for its next meeting (21 April), focusing on the implications for the bay and its beaches of the sale of the Port of Melbourne. The group also has research under way and continuing coastal issues such as beach cleaning, she says.

The ABM welcomes all councillors to attend its meetings but only one delegate a council can vote.

With the next Mornington Peninsula Shire council meeting scheduled for 11 April, Cr Fraser appears to have ample time to prepare his case for his councillor colleagues.

The problem is the date of the next ABM meeting, with its packed agenda possibly meaning the jet ski matter may not be discussed this side of the federal election.

Cr Fraser may be about to experience a winter of – if not discontent, at least niggling frustration. To “persuasive” and “determined” he may have to add “patient”.

At least most jet skis will be absent from the bay, snugged down for the cold months, as he waits.