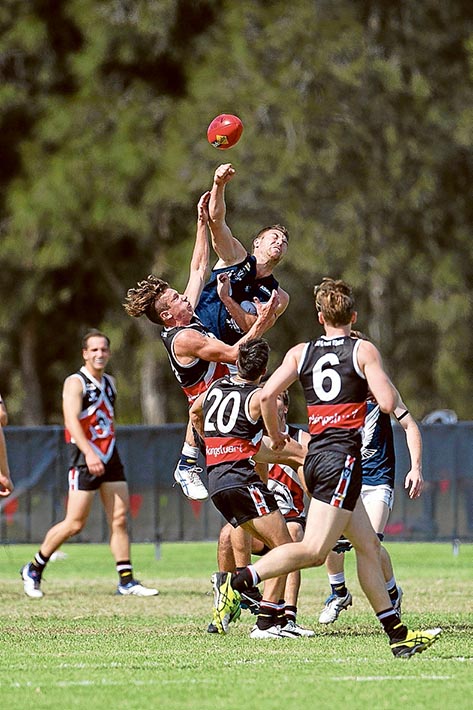 Eagles fly high: After trailing by nine points at half time, Edithvale booted five goals to one in the third term to set up the win in their Easter clash. Picture: Scott Memery
Share
Facebook Twitter LinkedIn Pinterest Email

MANY believe there will be daylight between Frankston YCW and the rest of the competition in MPNFL Peninsula Division this season.

Such talk would obviously upset opposition players and clubs, however, it really could be justified if you opted to mount an argument.

Regardless of the stats, there will be teams challenging. Mt Eliza will be there again and Pines have recruited extremely well.

Let’s start with the reigning premier.

While many clubs did their best to smash and grab players from the Stonecats during the off-season, they all recommitted.

Lachy Wallace and Anthony Barry have had interrupted pre-seasons in the VFL and are expected to play the first few with the Stonecats.

Benny Tellis hangs up the boots after a superb career but Ricky Morris comes back.

Brad Ulms is probably the only notable out in a team that had 12 players nominated in the 2015 Team of the Year.

Frankston YCW will be the benchmark.

Seaford is the club that gets to play YCW in Round one.

The Tigers were comprehensively beaten on Easter Saturday by a Pines team that had no midfield rotations in the second half.

The Tigers are a relatively new outfit that will rely on getting games into the kids and rebuilding.

The Redlegs finished on top of the ladder last season with 16 wins from 18 games, however, bowed out of the finals in straight sets.

Shannon is a wonderful coach. He brings the best out in his players, gets in the trenches with them and is a wonderful teacher of the game. The Redlegs need someone to educate the very talented kids coming through – and there are a heap of them.

The Redlegs do have concerns in attack. They have lost their only two key forwards in Scott Lockwood (Sorrento) and Justin Van Unen (won’t be available for at least the first month and even then he may land at Richmond in the VFL).

Daniel Gormley returns from Dromana and the big win was that Rohan Heasley turned his back on Queensland and decided to stay. David Hand comes with big wraps from the EFL, Matt Jackson and Matt Stanley are stars from the EFL and Matt and Jay Neratzoglou return.

Those who discount the Redlegs are kidding themselves.

What a game to kick off their season against Pines, the other team right in the mix.

Pines is already out of the blocks with a big 69 point win over Seaford on Easter Saturday.

Aaron Edwards was the star of the competition last season and he started 2016 in even better fashion than where he left off. He booted five goals in a blistering opening term before finishing with seven for the match. He played as much through the middle as he did in attack.

Defensively, Pines stood up again. The back six average no more than 15 games between them but due to the improvement, along with the willingness of the mids and forwards to work back to support, the Pythons are yet to concede more than 56 points in four matches (including practice matches).

Karingal will get away to a flier this season beating old foe Langwarrin.

The Kangas will be the new whipping boys of the competition after losing the likes of Rikki Johnston, Jarryd Amalfi, Ash Collins, Matt Dimkos, Dale Eames, Mith Gill-Furness, Ethan Rahilly and skipper Scott Sienkiewicz, while Luke O’Neil has retired.

The Bulls have an outstanding bunch of kids coming through too, who went deep in last year’s Unders finals.

The Dogs have lost Paul Dadds and Mitch Stansborough to Crib, the Nolan brothers have gone, as has Adam Symes and Ben Wells is in the VFL.

Bonbeach led at half time by nine points on Good Friday against Edithvale before the Eagles booted five goals to one in the third to set up their win.

Elliott Macquire from Old Mentonians had an immediate impact on Peninsula Division with a best on ground display for the Sharks while Wonthaggi recruit Chris Wylie booted two goals and was a big unit in attack. Shane McDonald booted a couple in his return game for the Sharks while recruits Jack Williams and James Murnane were standouts.

On Sunday, Edithvale and Chelsea will play their traditional clash.

The Eagles started their season in wonderful fashion against Bonbeach, winning by nine points.

Chelsea have a new coach in Brett Dunne, their fourth coach in as many seasons.

The Gulls have certainly added some talent to the list, however, have lost a few in ruckman Rory Gregg, Robbie Lancaster, Alex Smout, Ryan Stewart, Hudson Thomas and Jayden Attard.

The upshot is that there are only three teams who can win the flag – YCW, Pines and Mt Eliza. The rest will fight it out for fourth and fifth with Langwarrin finishing on the bottom.