Art wall reality for Galaxy not far away 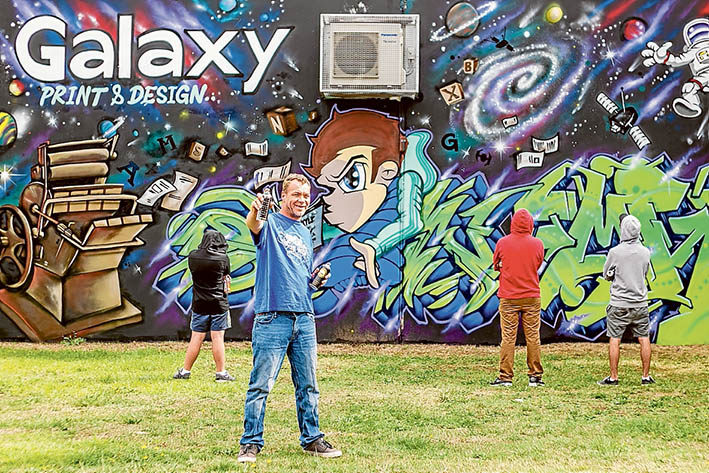 Art mix: Michael “Mikey” Newman, above, has mixed graffiti and art on the factory wall of a printer at Hastings in a bid to involve taggers and avoid a repetition of the previous unsightly “art” that covered the wall, below. Pictures: Yanni
Share
Facebook Twitter LinkedIn Pinterest Email WHILE officialdom tries to draw a line under the spread of graffiti, private enterprise has its own way of dealing with paint splattered walls.

David and Anita Hilet of Hastings-based printing firm Galaxy Print & Design, decided to enlist the help of self-confessed (but now reformed) graffiti tagger Michael “Mikey” Newman, to do a bit of signwriting and art on the side of their Reid Pde factory.

The large wall facing the Frankston-Stony Point railway line was an eye catching fixture, but for all the wrong reasons.

Its duck egg blue colour had been irresistible to graffiti taggers wanting to make their mark.

Judged to be unsightly, the Hilets contacted Mr Newman with a view to creating some real art on their wall, incorporating signage for their business and taking out some insurance against his efforts being defaced.

Last week the new mural took shape, with Mr Newman carrying out the artwork specified by Galaxy and some young graffiti taggers being asked to help and contribute art of their own.

“They created quite a bit of interest, with people stopping throughout the day to see what was going on,” Anita Hilet said.

“I reached out and found one taggers, told him what I was going to do and asked if he wanted to help,” he said.

“I took him through the process and gave him part of the wall, his space.”

Mr Newman said taggers in Hastings were limited in finding spaces and sometimes placed themselves in danger by climbing onto roofs.

Mr Newman, who does most of his commissioned work in Melbourne, said taggers respected murals and left them alone.

However, because the Mornington Peninsula had many towns taggers were isolated and “don’t get to learn the code”.

While painting murals earns some income, Mr Newman is a house painter by trade.

The murals are often designed to clean up illegal tags and often include business names, as in the Galaxy job.

“I used to be a tagger, until I was 18, but copped a couple of hefty fines which really put me back,” Mr Newman, 40, said of his early days in Queensland.