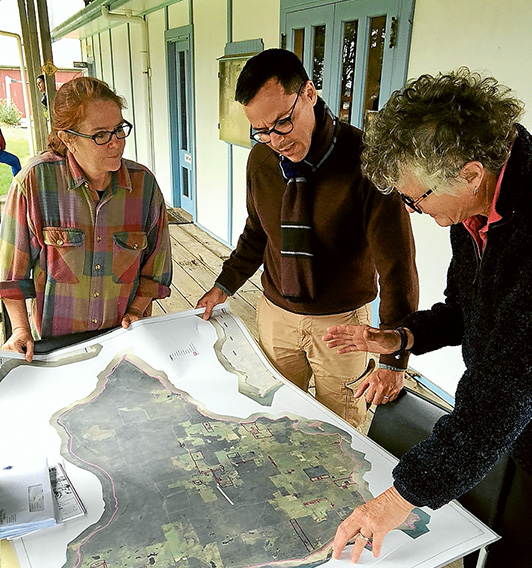 MORE than 96 per cent of French Island’s population supports a plan to eradicate feral cats – and that’s music to the ears of the federal government’s threatened species commissioner Gregory Andrews.

During a visit to the island last week Mr Andrews met with the island’s Landcare, Parks Victoria officers and community groups to discuss ways to make the island safer for wildlife by removing feral cats.

There has already been some success, with about 1300 feral cats culled over the past five years making life safer for threatened species, such as the long-nosed potoroo, eastern barred and southern brown bandicoot and hooded plover.

Mr Andrews’ visit was part of a broader national push under the Threatened Species Strategy to better control feral cats, seen as the biggest threat to small native animals as well as many birds, reptiles and amphibians.

He said Thursday’s visit was prompted by community and Landcare group support for conservation and the interest of Zoos Victoria, which is closely monitoring the success of the eradication program.

He said removing feral cats had a three-fold benefit: protecting wildlife from becoming a cat’s dinner, removing the threat of disease being spread by the cats, such as toxoplasmosis, which causes abortions and birth deformities in mammals, including humans, and by assisting farmers as the disease reduces lambing rates and makes their meat unsafe for consumption.

Mr Andrews said the island’s human population had “wide agreement” on desexing domestic cats, with only a handful being kept as pets and only one family’s cats not desexed, as well as in not allowing domestic cats to land there.

He said a cat-free island would prove attractive to the endangered orange bellied parrot, which once thrived there. “I can see it coming back when it sees there’s no danger,” he said. Feral cats are believed responsible for 20 of the 29 mammal extinctions in Australia since white settlement and are “implicated” in eight of the remaining nine extinctions. Another 124 species threatened by feral cats are deemed “at risk”.

Mr Andrews would not disclose recommendations on the feral cats until after they had been made to Environment Minister and Flinders MP Greg Hunt, probably before the next election.

He said the planned eradication would be part of an integrated pest management approach in which removing one pest species would not enable another, such as mice, to boom.

Development of the Curiosity cat-baiting system, with its poison pellet in a sausage, was dependent on it not threatening other species, he said. It is expected to be on the market next year.

Mr Andrews did not know how many feral cats were on the island but said numbers “can boom easily” with the right weather conditions and available prey.

“What a delightful thing it would be to eradicate feral cats from the island, which is a recognised Ramsar wetlands site and is making a name for itself as a clean and green food producing and tourism area only an hour and a half from Melbourne.”

He said threatened species in quarantine at Moonlit Sanctuary could be suitable for translocation to French Island when the cats were removed.