THE Goorangai was built in Newcastle in 1919 for the New South Wales government, then sold in 1926 to Cam and Sons where it was refitted as a fishing trawler. At the outbreak of war the Goorangai was one of 35 privately-owned vessels requisitioned by the RAN as auxiliary minesweepers.  Eight of these vessels had belonged to Cam and Sons and some of the fishermen had stayed with their vessels; in the case of the Goorangai, the RAN persuaded 16 of the fishermen crew to sign up including the skipper David McGregor, who was given the rank of commissioned warrant officer.

HMAS Goorangai was 223 tons in displacement, had a single boiler, and a maritime fit of a 12 pounder gun, four depth charges, small arms, and Oropesa sweep gear. 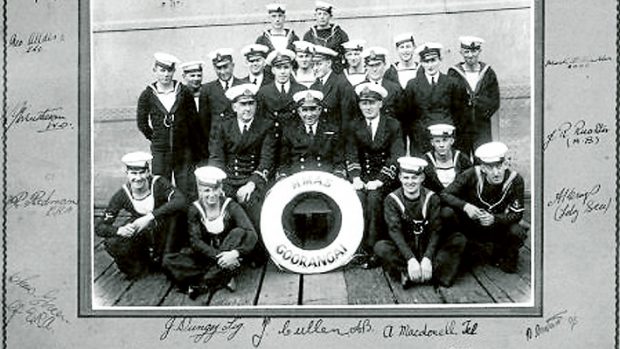 The crew of HMAS Goorangai. 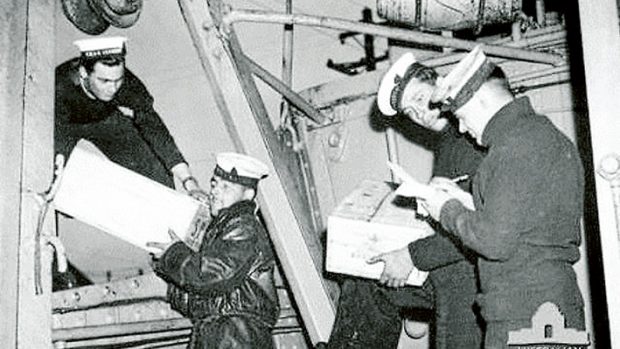 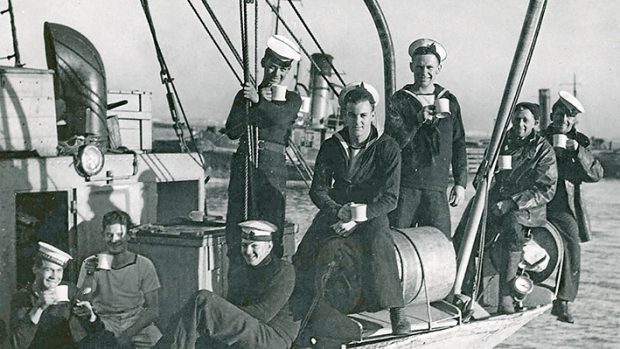 Crew members of HMAS Goorangai on the morning of the collision

Minesweeping routine in November, 1940 in Bass Strait required the ships to enter Port Phillip for resupply. After being anchored initially off Queenscliff on the hot afternoon of 20 November, 1940, at about 8pm. The Goorangai began a short move to a more comfortable anchorage at Point Nepean near the Quarantine Station.

On her way to Sydney carrying 65 passengers  and both general and perishable cargo was the MV Duntroon. About 8.45pm she struck the Goorangai forward of the funnel on the port side and cut her in two while she was crossing the South Channel. HMAS Goorangai sank in less than a minute resulting in the loss of her whole ship’s company of 24: three officers and 21 sailors. Lucky Jack: Before the Naval Board could implement its censorship ban, the local papers were able to carry some news items. On 22 November, The Argus informed its readers of the good fortune of Ordinary Seaman Jack Kenny who suffered “violent seasickness” and was replaced that day by the not-so-fortunate Ordinary Seaman F R Hack. It was Frank Hack’s first day at sea. He was 17.

After the collision the Duntroon eventually stopped, put on all its upper deck lighting, signalled that a collision had occurred, and lowered two lifeboats to search for survivors. After an hour of unsuccessful searching the lifeboats were retrieved. The minesweeper had sunk in 15 metres of water and only the masts were visible. The Duntroon then returned to Williamstown to have her bow repaired.

The German armed raider Pinguin and its auxiliary, Passat, laid six minefields in Australia between 28 October and 7 November, 1940. Passat minefields were laid east and west of Bass Strait. These minefields quickly claimed merchant ships Cambridge (British) at the eastern end of Bass Strait and the City of Rayville (American) at the western end on 7 and 9 November, respectively. Both ships lost one sailor while abandoning ship. The casualty on the City of Rayville was the first American sailor lost in World War II through hostilities.

The Passat minefield of approximately 100 mines closed Bass Strait to merchant shipping but was cleared by auxiliary minesweepers, including HMAS Goorangai.

Because the wreck of the Goorangai was within the shipping transit zone, she was perceived as a navigation hazard and a quick method of clearance and salvage was deemed essential. During the salvage operations the remains of just six of the sailors killed were recovered, as well as confidential books, the 12 pounder gun, and minesweeping gear. The plan to salvage or remove the hull was abandoned as it was ascertained that one of the depth charges had been armed and its accidental firing would have spelt disaster for the salvage crew. As there was the urgent need to clear the navigation hazard, it was decided to achieve this by dispersal of the wreck using explosives rather than raising and recovering it.

The initial Court of Marine Inquiry found both ships to be at fault for the collision and the captain of the Duntroon  was asked to “show reason” to retain his master’s certificate and Port Phillip pilot exemption.

At the “show reason” hearing the perceived poor positioning of side navigation lights aboard Goorangai was identified as the main cause of the collision. The fact that there were no survivors from one vessel led to what many thought was a “friendlier” verdict in favour of the surviving vessel and her crew, with the captain of the Duntroon being exonerated at the inquiry.

The news of the collision quickly reached media outlets ashore which believed the normal wartime censorship provisions did not apply as the loss of the Goorangai was not due to enemy action and did not involve aspects of security; they claimed the right of immediate publication. The Naval Board, however, secured a censorship ban. As could be expected, rumours soon began to circulate. The most common story was that the Duntroon was sailing through the South Channel with full navigation lights showing when she struck the Goorangai which was blacked out. The Duntroon continued to sail to Sydney without stopping as she was transporting troops for the war effort. Details as to the number of bodies recovered varied almost daily, including the claim that one body was buried at sea. The blasting operations in January, 1941 reduced the remains of the Goorangai to large and small sections of steel plating which still protrude from the sandy seabed. A small cylindrical boiler (2mx3m) is lying at the northern end of the site. Broken machinery and boiler sections are scattered around the site and occasionally wartime relics such as gas masks can be seen.

The remains cover about 200 square metres of the seabed and a considerable length of hull plating stands proud of the sand to a height of about two metres. The remains of the hull have been colonised by a diverse assemblage of  colourful encrusting organisms, such as bryozoans, sponges and soft corals. This in turn provides an ideal habitat for both free swimming and sedentary fauna, including many fish species, cuttlefish, sea horses, nudibranches and starfish. The abundance and variety of marine life, in association with the shipwreck, makes the HMAS Goorangai a popular destination for sport divers. The ship was recognised under the Historic Shipwrecks Act on 16 November, 1985.

In 1981 a memorial to HMAS Goorangai was unveiled at Queenscliff, and a memorial plaque was  placed at HMAS Cerberus, Crib Point, in 1997. The M V Duntroon was a passenger ship built for the Melbourne Steamship Company by Swan, Hunter and Wigham Richardson, Wallsend-on-Tyne, and entered service in 1939. She was designed for the East-West Australian coastal passenger service.

At the start of World War II the Duntroon was requisitioned for conversion into an armed merchant cruiser, but was found to be unsuitable. Following the collision with HMAS Goorangai the Duntroon was used to relocate captured officers off the German auxiliary cruiser Kormoran from Fremantle to Murchison tn Victoria.

In February, 1942 the Duntroon was then requisitioned by the Australian army for use as a troopship. It was involved in a second fatal collision in November, 1943 when travelling between Milne Bay and Gona. This resulted in the sinking of the USS Perkins with the loss of nine Americans but a court of inquiry found that the captain of the Perkins was accountable for the incident. In 1945 the Duntroon carried former prisoners-of-war back to Australia. Her army service continued until 1946  when she was chartered by the RAN for transport duties with the British Commonwealth Occupation Force.

Duntroon was returned to her civilian owners in 1950. In 1961 the ship was sold to Kie Hock Shipping Company and renamed Tong Hoo. She was sold again in 1966 to Africa Shipping Company and renamed Lydia. The ship was laid up in Singapore in 1967 and sailed to Taiwan for scrapping in 1973. The ship’s bell, which was removed when the Duntroon was sold in 1961, was subsequently installed on the parade ground of the Royal Military College, Duntroon, in Canberra.