Premature celebration for Gulls – or was it? 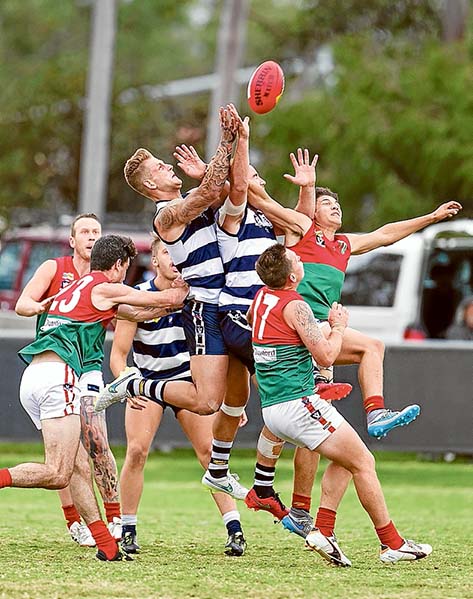 Omnishambles: The final siren marked a one point victory for Chelsea against Pines, but the umpires then declared it a draw. The review of the game by both coaches has confirmed Chelsea’s victory. Now it is up to MPNFL to decide what to do. Picture: Scott Memery
Share
Facebook Twitter LinkedIn Pinterest Email

CHELSEA celebrated a win against Pines on Saturday at the final siren. The goal umpires said it was a draw.

The two time keepers had the Seagulls booting 7.4 in the last quarter. The goal umpires had them booting 7.3.

Pines coach Pat Swayne watched the replay of the final quarter on Saturday night after the match and thought that Chelsea had booted four behinds in the last term. Swayne shared that information with Chelsea coach Brett Dunne.

Dunne was quick to watch the replay and made his own determination.

Chelsea FC Football Manager Mason Stewart confirmed on Sunday that “we have viewed the vision and we have had put it forward to the MPNFL to consider”.

At the time of going to press, the MPNFL had not provided details of what process would take place and whether the result of the game could be changed.

Swayne said he was “gutted”.

“Umpires convene and compare scorecards at the end of each quarter. They gave Chelsea three points in the last quarter and the replay clearly shows they kicked four behinds. The scoreboard was right and as far as I’m concerned, Chelsea won by a point,” Swayne said.

“We just were not good enough for long enough and we need to get better at that,” he said.

The scoreboard had Chelsea in front by a point at the final siren and the Seagulls celebrated as if they had won the game. Pines went into the rooms believing they had lost.

The umpires then declared it a draw.

Chelsea coach Brett Dunne said the game could have been lost in the third quarter.

The Gulls lost Ben Holman for the first 15 minutes of the third quarter and were forced to play with 17 men. Pines took advantage and opened up a 33 point three quarter time lead.

The Seagulls booted 4.9 to 2.2 in a dominant second quarter kicking with the breeze, however led by just two points at the main interval.

The Pythons took advantage of the strong wind in the third and doubled its score, going from 6.6 to 12.12 in 30 minutes.

Trailing by five goals at the final change, the Gulls were far from finished. The home side charged and got to seven points in front (according to the scoreboard) with three minutes remaining before Pines got one back.

The scoreboard said the Gulls were up by a point and accordingly, they went into shut down mode. Pines continued to attack and had a shot for goal after the siren, only to miss everything.

While the Seagulls celebrated, the goal umpires convened in the middle of the ground, compared notes and changed the scoreboard to read Chelsea 13.18 (96) to Pines 14.12 (96).

Dunne was annoyed that his side let another game slip (it lost to Edithvale-Aspendale last week by five points).

“To be in front and then to let it slip was disappointing,” Dunne said.

“It was a real positive that we were able to come back from 33 points down and it was a good effort but we should have won the game.

“Two points is better than none I guess but I would have liked the full four,” Dunne said.

Matty Baxter booted three goals for the Gulls and Dave Willett kicked three also to give him seven for the season.

Beau Caia has been a revelation in the opening two games with two three vote games for the Gulls. Caia is a 20-year-old solid, running defender who has come from Shepparton United to study.

Dunne said the defender “wins his own ball and makes really good decisions”.

Aaron Edwards booted four for the Pythons and Guy Hendry booted three while Beau Hendry and Paul Scanlon were two of their better players.

A lot was expected of the Pythons this season but results to date show they are not much better than 2015 when they were back with the pack.

Mt Eliza flexed its muscles again on the weekend and this time it was Karingal on the receiving end.

Zallec White booted four for the winners while Justin Van Unen was out of ‘The Recruit’ house and finished with three. Timmy Strickland and Brodie Shaw were superb.

Tommy Wilkinson and Blake Simpson with three goals were the best of the Bulls.

The Stonecats had 11 goal kickers while Byron Barry and Anthony Barry made it impossible for the Kangas forwards.

Sean Herdman and Mitch Porter (two goals) were the best of the Kangas.

Seaford caused the upset of the season to date, coming from six points down at three quarter time against Mornington to record a 15.9 (99) to 13.14 (92) victory.

Matt Andrews was the difference between the sides with five goals for the Tigers, while Mitch Finn and Josh Stokes dominated.