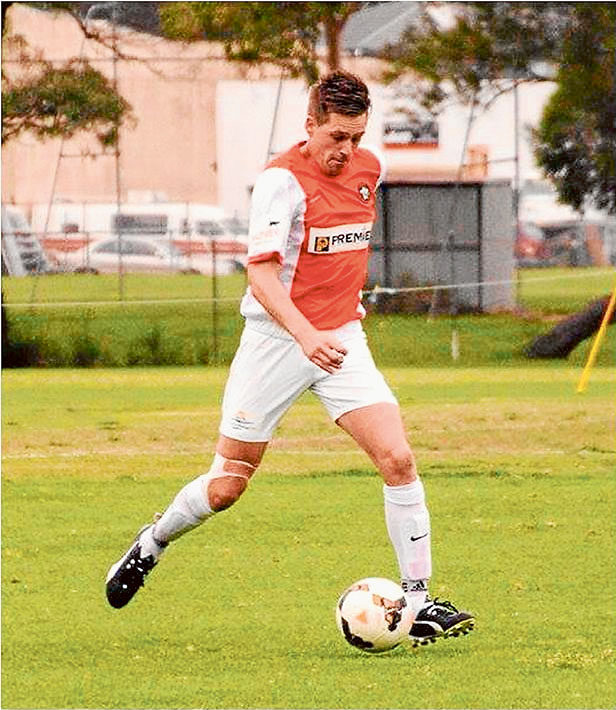 MORNINGTON continued its recent success against Langwarrin with a 2-1 win in their Anzac clash at Dallas Brooks Park on Sunday.

Mornington struck in the 5th minute when livewire striker Wayne Gordon stole in behind the Langy defence and toe-poked the ball past teenage goalkeeper James Foster who was deputising for the injured Robbie Acs.

The simmering feud between these fierce local rivals burst into open conflict with a melee in the 33rd minute sparked by a tackle involving Mornington midfielder Paul McEvoy and Langy defender Alex Van Heerwarden.

McEvoy was shown a straight red card and referee Hary Milas later confirmed that the send-off was for serious violent conduct in the form of a two-footed tackle.

Langwarrin midfielder Sam Scott also was sent off after retaliating during the melee and receiving a second yellow card.

In the 65th minute Langy striker Caleb Nicholes was brought down inside the box and converted the resulting penalty to make it 1-1.

Gordon was thwarted by a superb save by Foster in the 75th minute but the teenager was helpless when Andy McIntyre scored an own goal in the 86th minute while attempting to clear.

Straight from the restart Mornington keeper Kris McEvoy was forced into a fine save by Langy midfielder Boris Ovcin and two minutes later a Nicholes free-kick was destined for the top corner until McEvoy at full stretch tipped it wide.

Pines took the lead in the 12th minute when Kyle Crawford’s cross from the right found Nick Lekakis whose shot was parried by Warragul keeper Jake Richardson and tapped in by CJ Hodgson.

Four minutes later scorers were level when Pines keeper James Laminski charged off his line but only succeeded in hammering the ball into Warragul striker Liam Johnston who ran onto the ricochet and knocked it into the open goal.

Just before half-time Lekakis was pressured off the ball which was slotted in between Pines’ central defenders for Sam O’Dea to run onto and slip past Laminski to make it 2-1.

Johnson got his second from the penalty spot in the 75th minute and O’Dea’s double came in the 91st minute in an incident that saw Laminski taken off with a head injury that required stitches.

There were three goals in the final four minutes of Saturday’s top-of-the-table State 2 South-East clash between home team Peninsula Strikers and Old Scotch which ended in a 3-3 draw.

Strikers senior coach Craig Lewis and assistant Billy Buchanan refused to be interviewed after this seesawing goal fest in which Strikers blew a two-goal lead and threw away the points in the final minutes.

Their anger was palpable and it was directed at their players for poor defending and lack of concentration.

The State 2 South-East clash between Beaumaris and visitor Seaford United turned into a rout with the home team winning 6-0.

The result leaves Seaford with just one goal to its name this season and 11 against.

Opposing keepers Jonathan Crook (Skye) and Paul Seeley stole the show in the first half.

Crook made two fine reflex saves in the opening 30 minutes and Seeley matched him in the 40th minute denying Matthew Wilson from close range.

But a minute before the break Seeley charged off his line to try and punch clear and didn’t get there in time to stop Wilson heading into the unguarded goal.

Early in the second half Skye grabbed a two-goal cushion.

Wilson’s long throw was headed on to the far post by Marcus Collier where Dogan Dagli had the simple task of heading in from point blank range.

The visitors would have clawed their way back into the contest if not for the agility of Crook who tipped over a stinging volley from Nicholas Corsini in the 87th minute.

Two minutes later Wilson’s firm header struck the underside of the bar and was cleared but a superb solo run by substitute Daniel Attard in the 92nd minute was rewarded when he squared the ball to fellow sub Christopher Busuttil for a tap-in.

Rosebud Heart inflicted a first defeat of the league season on Old Mentonians on Saturday.

The 3-0 away win took Scott Morrison’s men to the top of State 5 South and threw the gauntlet down to neighbouring Baxter in second place.

Baxter had a bye after Parkmore dropped out of the competition and a rescheduling of fixtures took place.

Heart opened its account against Old Mentonians in spectacular style courtesy of a 25-metre screamer from the lethal left foot of Blake Hicks.

Goalscoring guru Dave Greening was brought down inside the area in the 42nd minute and converted the resultant penalty.

Greening headed against the bar shortly after then new signing Craig White was brought down for what looked like a second penalty before the interval but Heart’s appeals fell on deaf ears.

Englishman White could prove to be a clutch signing. The 24-year-old attacking midfielder joined Heart last week from Essendon United and had a fine match.

James Liddle’s volley from the edge of the area in the 62nd minute was the final nail in Old Mentonians’ coffin but there were two send-offs in the second stanza, both straight reds – Heart’s Daniel Hodge in the 65th minute and Old Mentonians’ Dylan Taylor in the 89th minute.