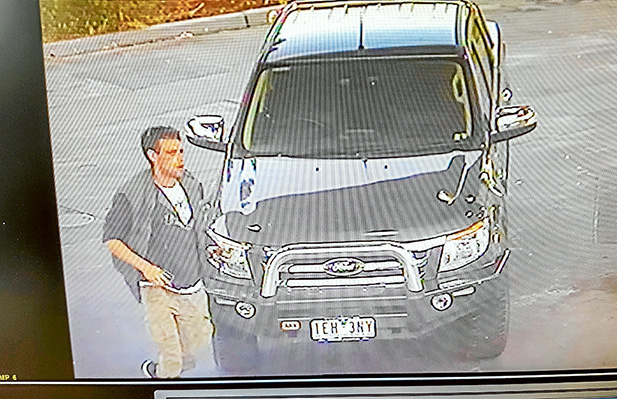 A CREDIT card stolen from a car parked in the driveway of a house in Robin Pd, Rye, overnight Wednesday 13 April, may have been used to buy petrol for a Ford Ranger utility stolen from outside a house in Koonya Av, Blairgowrie, around the same time.

CCTV captured images of the man police wish to speak to while he filled up, 6.30am. He then used the credit card to make a store purchase.

At 7am the suspect was again shown on CCTV at the Shell service station, Frankston-Flinders Rd, Frankston, making more purchases using the stolen credit card.

At 7.30am he was seen on CCTV at Woolworths Langwarrin attempting to make even more purchases using the credit card, but the transactions were declined.

The Ford Ranger has not been found. Its distinctive features include an ARB bull bar with chrome nudge bar, chrome tube style side steps and a rolling steel tub cover.