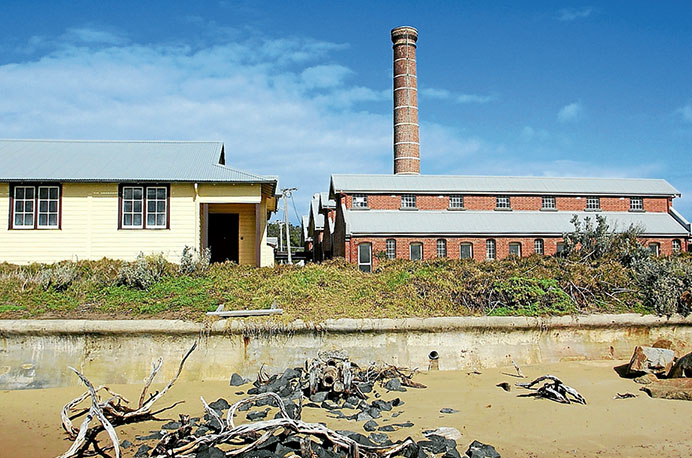 THE state government has signed a memorandum of understanding with Melbourne University to establish a marine research centre in part of the heritage listed former quarantine station despite a master plan for the future use of Point Nepean National Park not being due for release until later this year.

The agreement means that the university will receive $2.1m over six years from the National Environmental Science Program towards establishing a National Centre for Coasts and Climate (NCCC).

The university says it will provide a $3m “matching investment”.

Vice-chancellor Professor Glyn Davis said the university was “happy to be moving forward with more active discussions about its plans for the site”.

“The university hopes to contribute to the future of the park, and looks forward to working with government and with the community in exploring this development.”

The state and federal governments left it up to the university to issue a news release about the proposal which it says is “still subject to the community consultation process that will inform the Point Nepean Master Plan”.

Mr Smyth said previous proposals for Point Nepean by the university had been flawed and gave notice that the VNPA would “vigorously oppose any similar proposal”.

“Preferred uses should be those that are open to public scrutiny and maximise benefit to the national park, not those for which the public has been sidelined in the process,” he said.

The state Minister for Environment, Climate Change and Water, Lisa Neville, said the agreement with Melbourne University would not pre-empt outcomes of the process by Parks Victoria “that will inform the Point Nepean master plan that is currently underway”.

Ms Neville said the federal government’s $2.1 million would have been lost if the state had not come to an agreement with the university.

She said the money was “going to be taken off the table at this federal budget”.

“If the community does not support  the university’s proposal, it won’t go ahead, which is clear in the MoU,” Ms Neville said.

The student union publication Farrago in March 2015 reported the NCCC “has been designed as an educational interface between the university and the general public” with the university concentrating on “outreach programs and research activity pertaining to coastal productivity”.

“A Coastal Discovery Facility will be constructed within the main complex that will serve as an interactive learning centre and public aquarium, showcasing Southern Ocean marine life. The university plans to use this space to run short courses in environmental science, management and engineering. Construction on the entire facility has already begun, with completion expected in 2016,” Farrago reported.

The university says the centre will research coastal ecology and management, “as well as delivering teaching in those areas”.

The university also hopes to establish a Coastal Discovery Centre, “showcasing this research and contributing to greater public understanding of the ecological and cultural treasures of Point Nepean”.

Long an advocate for coastal research at Point Nepean, Mr Hunt said the money was “intended to position the NCCC as a world-class research facility into the threats and opportunities presented by climate change in the coastal zone”.

“The old quarantine station’s empty buildings are an ideal location for this research centre. It will allow for the adaptive re-use and ongoing care of some of the site’s nationally-significant heritage precinct,” he said.

Mr Hunt said the NCCC would be a partner in the Earth Systems and Climate Change Hub under the National Environmental Science Program.

The 2009 management plan signed by then state Environment Minister Gavin Jennings and his federal counterpart Peter Garrett also proposed a National Centre for Coasts and Climate at the quarantine station.

There was no mention of the University of Melbourne: “There is an opportunity to encourage educational visits, particularly by secondary school groups undertaking curriculum-based and VCE studies, and tertiary study groups covering a range of disciplines including the sciences, arts and humanities,” the plan stated.

The years leading up to that plan saw the Launceston-based Australian Maritime College and La Trobe University abandon plans to occupy part of the national park.

Melbourne University was included in the 2014 proposal by the Point Leisure Group and accepted by the Denis Napthine-led state government based around a luxury hotel, thermal pools and “health and wellness”.

The current state government won’t say how much it paid to end the contract with the Point Leisure group.

The latest announcement seems a far cry from the university’s initial plans for the NCCC which, on 26 June 2010, Mr Hunt told parliament involved a $7m fit-out of buildings; provided places for 110 students; $2m “trailing rent”; $50 million provided by the Commonwealth through different sources; and, the state placing $10 million in escrow “purely for the purposes of the quarantine station area”.